Xiaomi’s upcoming flagship smartphone, called the Xiaomi Mi 6 has been the subject of numerous leaks and rumors lately, giving us fair idea about what the smartphone would look like and the specifications that it will pack. Now, ahead of its official launch, the device has been spotted on Oppomart, revealing the price and its key specs. 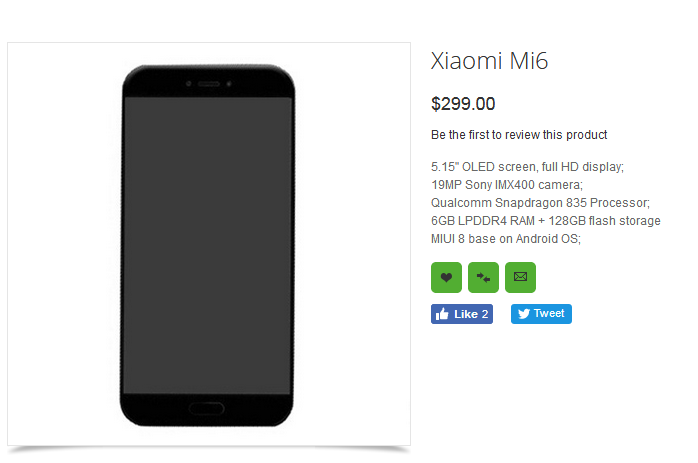 The Xiaomi Mi 6 with 6GB RAM+128GB storage is listed on Oppomart for $299 (Rs 19,570). Previous leaks reveal that the Mi 6 with Qualcomm Snapdragon 835 chipset and curved display could cost around CNY 2999 (approximately Rs. 29,700). The Qualcomm Snapdragon 835 SoC variant with flat display could carry a price tag of CNY 2499 (approximately Rs. 24,700). The lower specced model with Helio X30 chipset will cost CNY 1999 (approximately Rs. 19,800). As per the latest report, the Mi 6 will be unveiled at MWC 2017 and will go on sale in March. We expect to know more details during the probable launch event in March.

A new leak reveals that the Mi 6 will be launched in not just one or two but three different variants.

Besides, the launch date of the Mi 6 also seems to have been revealed. Li Wanqiang, co-founder and VP of Xiaomi, revealed that the company will unveil a ‘surprise product’ in March, hinting that the Xiaomi Mi 6 could see the light of the day at MWC 2017.

As per the latest leak, the Mi 6 will be launched in two variants- one with dual curved display while other variant will pack flat screen display.

Xiaomi is widely expected to unveil its much anticipated flagship smartphone, the Xiaomi Mi 6 in the first half of 2017. While previous rumors were hinting at smartphone’s launch in February or April, now a new report has emerged saying that the successor of Mi 5, the Xiaomi Mi 6 will be launched on February 6, 2017.

Some leaked images of the alleged Xiaomi Mi 6 surfaced over the internet previously, giving us fair idea about how Xiaomi’s forthcoming flagship smartphone would look like. As per the leaked images, the Mi 6 will feature a rounded design. The home button of the phone is likely to double up as a fingerprint sensor. On the rear, the smartphone will feature dual tone metallic design with camera module in the top left corner. As far as specifications are concerned, the Mi 6 could come in three variants based on processor. Called the Xiaomi Mi 6S, Mi 6E and Mi 6P, the three variants will pack Qualcomm’s Snapdragon, MediaTek’s Helio and Xiaomi’s own Pinecone chipset respectively. Other leaked specifications include 2.5D curved display, 6GB of RAM, Quick Charge 4.0 support. It will run Android 7.0 Nougat with MIUI 9 and feature USB Type-C port. For photography lovers, the Mi 6 will sport a 16 mega pixel rear camera with dual-tone LED flash and 4K video recording. Upfront it will sport a 4 mega pixel secondary camera for capturing selfies and making video calls.