Domestic mobile handset company Micromax is soon expected to announce its new budget smartphone in the Bolt series- Micromax Bolt A067. According to Facebook post of Mahesh telecom, an established retailer from Mumbai, this entry level smartphone is available in India before its official launch.

As revealed by the two images in the Facebook post, this smartphone is powered by 1.3 GHz dual-core processor with 512 MB RAM and runs on Android KitKat operating system. It houses a 4 inch WVGA display with 800 x 480 pixel resolution. This smartphone comes with 4 GB of internal storage which is further expandable up to 32 GB with microSD card. It sports a 2 mega pixel primary or rear camera with LED flash and 0.3 mega pixel front facing camera. 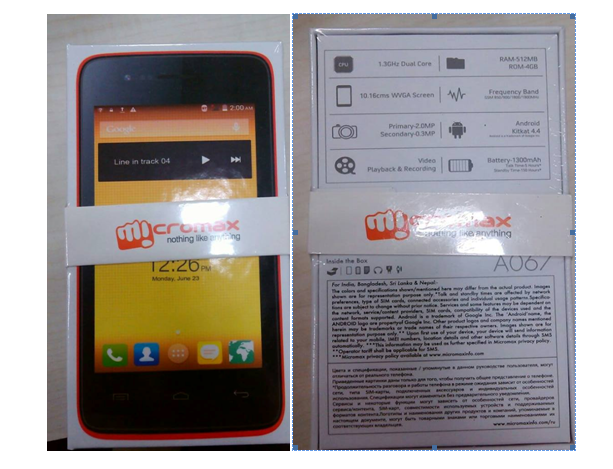 It is armed with 1300 mAh battery. Connectivity options include 2G, WiFi 802.11 b/g/n and Bluetooth 4.0. This dual-SIM smartphone hosts a package of features and is targeted towards the first time buyers in the Indian market.

Specifications of Micromax Bolt A067 Smartphone

Micromax Canvas Selfie is powered by 1.7 GHz Octa-core processor and runs on Android KitKat 4.4 operating system. The display is 4.7 inch HD IPS with corning Gorilla Glass 3 protection. It gets 2 GB RAM and 16 GB internal memory which is expandable up to 32 GB. It sports 13 mega pixel camera on both the rear and front ends with flash and Sony Sensor which is a very impressive feature of this smartphone. It is equipped with 2300 mAh battery. The price of this device has not yet been announced and it will go on sale starting from mid-January 2015.

While Micromax Canvas Xpress is powered by a 1.3 GHz quad core processor and runs on Android KitKat 4.4.2 operating system. It comes with a 4.5 inch FWVGA display and entails 1 GB of RAM while 8 GB internal storage is expandable up to 32 GB. It houses a 5 mega pixel rear camera with auto focus and 0.3 mega pixel front camera. It packs a 1950 mAh battery and it is available exclusively through Flipkart for Rs. 6,999/-.

While the company has not announced launch of this smartphone officially, the price of Bolt A067 is mentioned as Rs. 3,899/- in the Facebook post.