Yu Televentures has launched its flagship smartphone Yu Yuphoria alongside YuFit band and HealthYU device in India. Priced at Rs. 6,999, the Yuphoria will be available exclusively on Amazon India via flash sales starting 28th May 2015 and registrations will start today at 5.00 PM. It will be available in two color options- Champagne Gold with White and Buffed Steel with Black. It boasts of its stunning design featuring metal ring.

As for specifications, the Yuphoria it is powered by a 64-bit 1.2 GHz quad-core Qualcomm Snapdragon 410 processor paired with 2GB of RAM and features a 5-inch TFT IPS display with 1280×720 pixels resolution. The phone runs Android Lollipop based Cyaonogen OS 12 and comes equipped with 16GB of inbuilt memory. 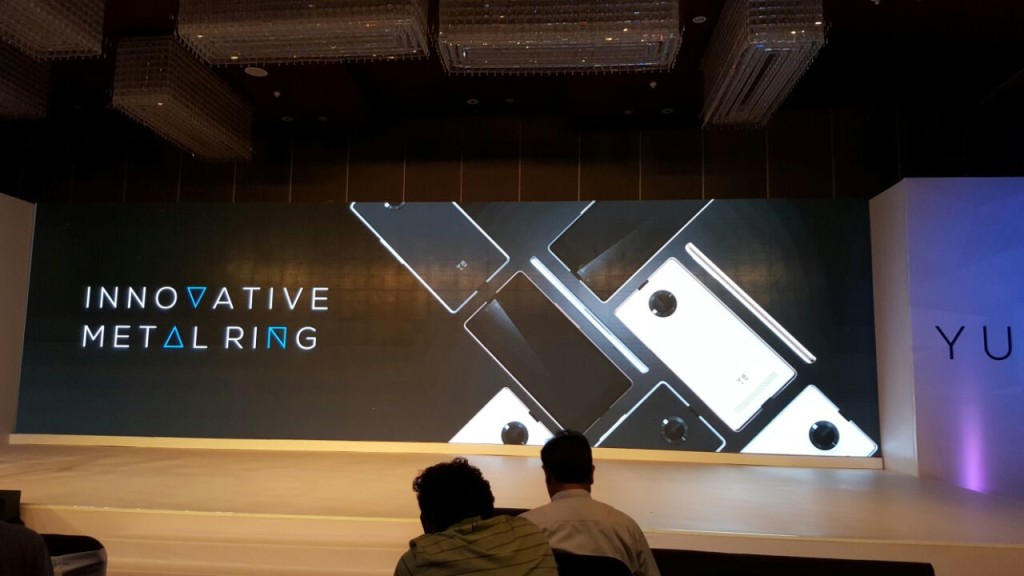 On imaging front, it comes with 8 mega pixel rear camera with LED flash and f/2.2 aperture while there is also a 5 mega pixel front camera onboard. Backed up by a 2230 mAh battery, it is claimed to deliver talk time of up to 7 hours and standby time of up to 160 hours. Connectivity options include Dual-SIM, 4G LTE and Bluetooth 4.0.

Features and Specifications of Yu Yuphoria

The YuFit band on the other hand is a fitness tracker with AMOLED display which will track the sleep, distance traveled  by the user, calories burnt while also displaying messages and calls which the user will get on synced smartphone so that you always stay connected. It is priced at Rs. 999 and first 1000 users will get free assistance from trainers and coaches.

The HealthYU device is priced at Rs. 4,999. It measures body vitals like ECG, heart rate, skin temperature, blood pressure and much more. The user will just need to hold the device with the smartphone to get all the body details right on the smartphone. It also sends them to doctor with just a tap on the screen.

Yu Televentures is all set to take the wraps off its Yu Yuphoria smartphone in India this month. Yu has started sending out invites for an event scheduled on 12th May 2015 where it will launch its next smartphone. The company has been teasing the smartphone for quite a long time revealing that it will come with a 64-bit processor paired with 2 GB of RAM. The handset will house 16 GB of inbuilt storage and run Cyanogen based on Android Lollipop operating system. There is no word on pricing and availability details of Yuphoria phone as of now. Stay tuned with us for more developments on this story. 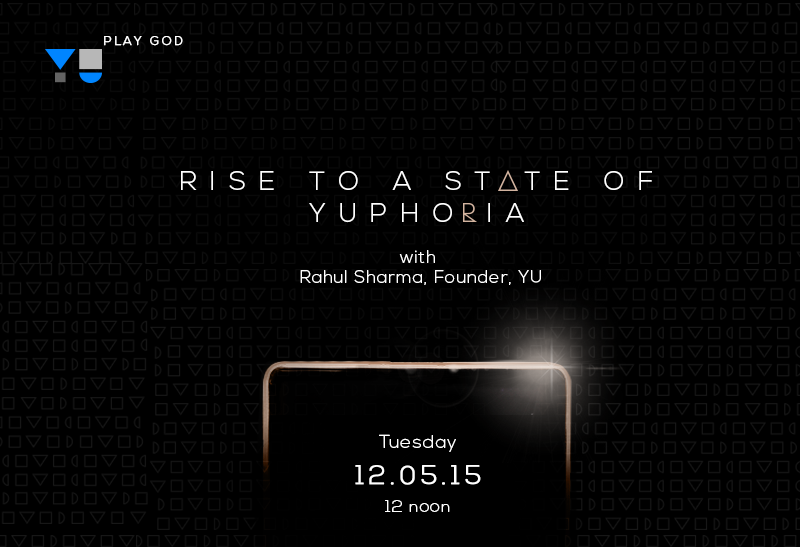 Yu Televentures is gearing up to launch its new smartphone YU Yuphoria in India this month. Yu has revealed that it is going to launch Yuphoria, the successor to Yureka phone on May 12, 2015. Though the company has not revealed the specifications, pricing or any other details about the handset, it had been teasing the forthcoming Yuphoria phone lately. As per the teaser images shared by Yu, its upcoming phone will run Cyanogen based on Android Lollipop OS and feature 64-bit processor, 2 GB of RAM and 16 GB of inbuilt storage. 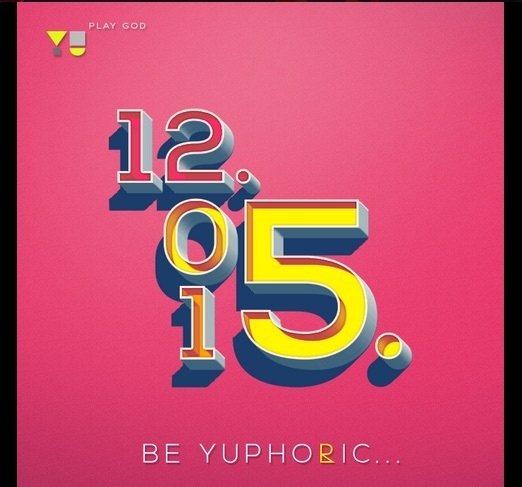 After the success of #YUNameIT challenge for crowdsourcing the name of its forthcoming Yuphoria phone, Yu Televentures has introduced a new design challenge named #YUCreateIt. This design challenge seeks input in the form of wallpapers, ringtones, icon packs, animations and themes from Yu fans and users. Voting will be hosted for top entries from each category to decide the winner. But the excitement does not stop here because the contributors will be rewarded with prizes worth Rs. 5 lacs, an invitation to join in the launch of YUPHORIA and much more. The contest has already been started from April 23 while participants can visit this link to submit their entries on or before 10th May 2015.

Yu Televentures has finally decided the official name of its upcoming phone which is code-named as Project Caesar. Yu’s next Cyaonogen OS phone will be called Yuphoria. The company hosted a naming campaign “#YUNameIt” on its social media platform where it asked its fans to suggest names for its next phone. The company received over 100,000 entries from which top five names- Yuphoria, Yuknight, Yunicorn, Yunity, and Youth were selected. Final voting was conducted to choose among these names and Yuphoria was selected as the name for its next phone. Read on to find out more information on specifications, features, price and availability of Yuphoria smartphone.

Yu Televentures has teased its upcoming smartphone codenamed as Project Caesar yet again. In the latest teaser, the company has revealed three specifications of the handset. Yu is also taking dig at rival company Xiaomi. As per the teaser, the upcoming Project Caesar phone will pack a 64-bit processor paired with 2 GB of RAM and will house 16 GB of inbuilt storage which is double of what Xiaomi Redmi 2 is offering. In the previous teaser however, the company revealed that the handset will run Cyanogen OS based on Android 5.0 Lollipop. Rest of the specifications are unclear as of now. Stay tuned with us for more updates! 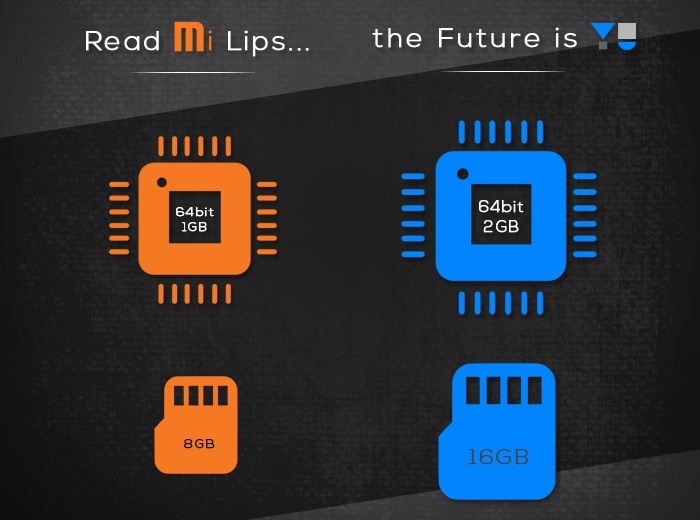 Domestic handset maker Micromax has teased its upcoming smartphone codenamed ‘Project Caesar‘ under YU brand. Yu Televentures has posted an image on its Twitter page which reads ‘You’ve got a KitKat. Why don’t you wait for a Lollipop. Stay tunes for project caesar.’ The image is accompanied with a tagline which says ‘#Lollipop comes pre-loaded with Project Caesar! Why would YU buy anything else?’ This recent post from Yu confirms that YU is coming up with its new smartphone soon in the Indian market with Lollipop operating system. 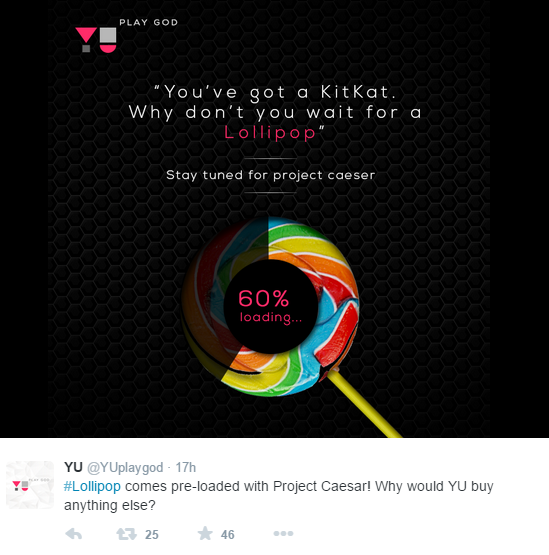 In a recent interview with BGR, the co-founder of YU Televenture, Rahul Sharma confirmed that the new smartphone will launch in April 2015 in the Indian market. He also revealed that YU is not only confined to smartphone and the firm may also launch few wearables soon

“Micromax already had tailwind behind it and were growing in numbers month after month, quarter after quarter. We were thinking about what’s next and we wanted to target a different set of users – the tech natives and digital natives – the nerds. They want to customize their phones. What were we doing for them? And with that thought YU was born,” said Sharma.

Sharma did not reveal any details about specifications or pricing of the upcoming handset. The Project Caesar smartphone, however is going to be launched in April 2015. We will update you as soon as more information on the same will be made available. Stay tuned with us!