Acer has unveiled the successor of Chromebox CX1, the Acer Chromebox CX12 at Computex 2015. It is essentially a desktop PC running Chrome OS. The Chromebox CX12 is powered by an Intel Broadwell with either Core i3 or Celeron processor paired with 8GB of RAM DDR3 and Intel HD integrated graphics. It houses 16GB SSD storage, four USB ports and HDMI port. 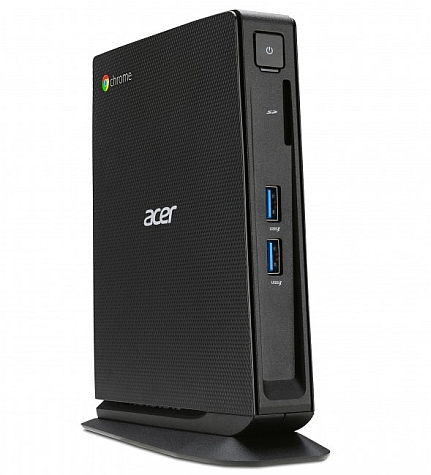 It also features Citrix Ready and Kensington lock. More details about Acer’s new Chromebox are likely to surface in the coming days.

At the same event, Asus also launched Chrome OS based Chromebox CN62. It comes with fifth-generation Intel Core processor and supports 4K (2160×3840 pixels) resolution monitors. The device features  Wi-Fi 802.11 ac which is faster as compared to its predecessors. With sound level of 17dB and 6W of power, the Asus’s new Chromebox is quieter and consumes less power.

Lenovo also launched its ThinkCentre Chromebox in April 2015 with price starting at $199 (approximately Rs. 12,500). The Lenovo ThinkCentre is targeted towards students and entrepreneurs. It is designed to work with 23-inch Lenovo ThinkCentre Tiny-in-One monitor. Specifications of the Lenovo Chromebox include fifth generation Intel Core processor paired with up to 4 GB RAM and 16 GB SSD storage. The dimensions of the device are 177.8x35x182.8 mm. As for connectivity, it comes with four USB 3.0 ports, HDMI jack, Ethernet jack and DisplayPort.

The Acer Chromebox CX12 is likely to go on sale after summers this year with price starting at $199 (approximately Rs. 12,500). We expect to hear more from the company about exact pricing and availability in the coming days.