Acer was the first company to bring a budget tablet in the form of Acer Iconica B1 and the company has just announced the cheapest quad core tablet offering from a MNC, the Iconica A1. The budget tablet has 7.9 inch screen which has a resolution of 1024×768 pixels. It will come in two guises, Wi-Fi only and 3G+Wi-Fi. Also there will be two memory options, 8GB and 16GB with the latter being the dearer option. 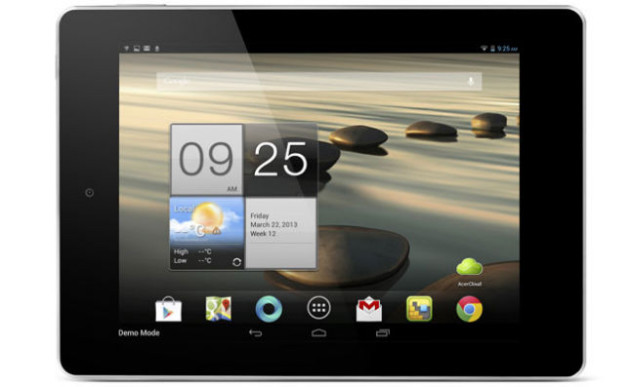 Powering the device will be a 1.2GHz quad core processor which will team up with a 1GB RAM. Acer launched the Iconica B1 with a Mediatek made dual core processor and its higher end sibling, the A1 also features a Mediatek processor. It will run the latest version of Android, 4.2 Jelly Bean but a future upgrade in highly unlikely. The internal storage capacities of 8GB and 16GB can be expanded by another 32GB with a microSD card.

The rear of the tablet gets a 5MP camera without a LED flash and a front VGA camera for video calling. It weighs 410 grams for the Wi-Fi variant whereas the 3G counterpart weighs 20 grams more. In either case the tablet will be quite the portable unit. Bluetooth 4.0, GPS and an HDMI port will be adding to the connectivity package. A 3,250 mAH battery will be present under the hood and shall last around 4-5 hours according to us.

The tablet has been launched for $169.99 in US for the 8GB version while the 16GB version has been priced at $199.99. These convert to approximately Rs.9,100 and Rs.10,750 in Indian currency. When Acer launched the Iconica B1 for Rs.7,999 in India, it was at par with US pricing. So when Acer decides to bring it to the India shores, expect the pricing to be more or less similar to the US pricing, making the tablet the best your money can buy.