Asus has launched its ZenFone Max smartphone in India for Rs. 9,999. Highlight of this device is its 5000mAh battery which is claimed to deliver up to 37.6 hours of talk time on 3G networks and up to 914 hours of standby time. It can also be used as a power bank to charge other devices. 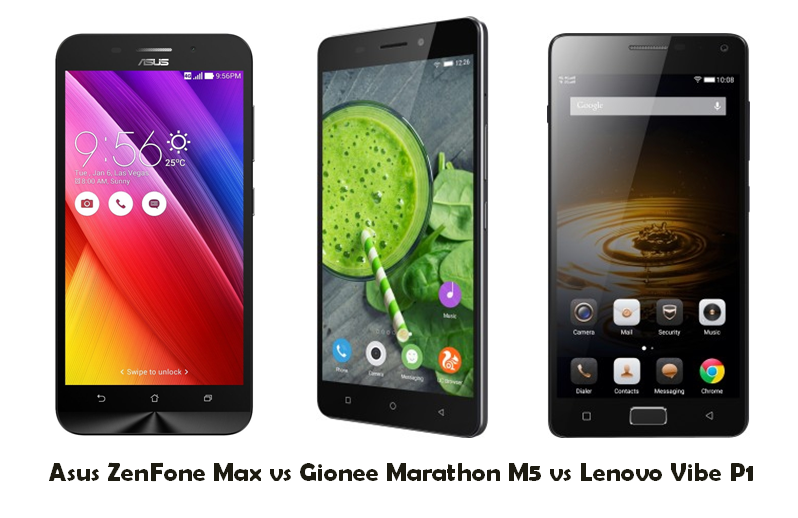 This round is a tie. All the three smartphones sport a 13 mega pixel rear camera and a 5 mega pixel front facing camera. The rear cameras of ZenFone Max and Vibe P1 are accompanied with dual LED flash while Gionee Marathon M5 features single LED flash.

Battery department is highlight of all the three smartphones. The Asus ZenFone Max and Lenovo Vibe P1 are fueled by a 5000mAh battery whereas the Marathon M5 is backed up by a 6020mAh battery.

You can buy these smartphones from following best buy links:

If you are looking for a massive battery smartphone in sub-Rs. 10,000 price range, then you should go for Asus ZenFone Max. The Gionee Marathon M5 offers monstrous 6020mAh battery and seamless performance with 3GB of RAM. If apart from battery, your priority is display and strict security, then Lenovo Vibe P1 with full HD display and fingerprint scanner is the smartphone you are looking for.

Which smartphone among Asus ZenFone Max vs Gionee Marathon M5 vs Lenovo Vibe P1 do you think is better? Share your views with us in the comments section below!