Samsung seems to be readying up a 6-inch phablet for a CES or a MWC launch and will christen it as their next flagship, the Note 3. But you see, we Indians first started to catch up to the MNCs and then we just went ahead and made a technology reach the market that the Koreans and the Taiwanese were still working upon. Yes we are taking about a mobile phone with a 6 inch screen which Samsung is rumoured to be developing, but Indians have already launched a couple of them with a similar screen size. 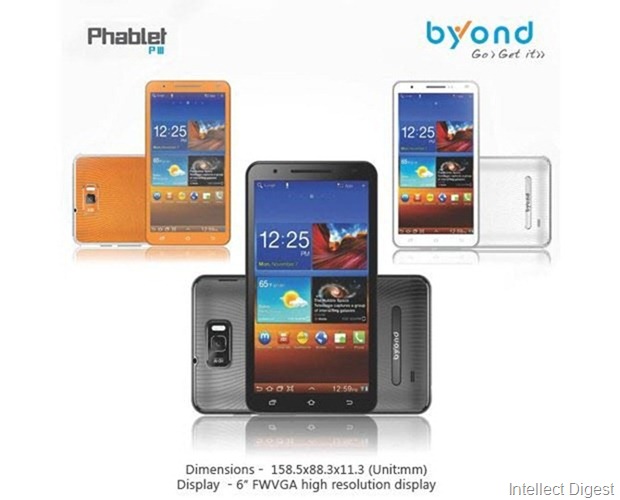 The Pune based Indian electronics maker, Byond has just released their next flagship, the Phablet III with a mammoth 6-inch screen display with a resolution of 854 x 480 pixels and a dual core 1GHz processor. The Note series might have a quad core flagship, but that costs way more than what it costs. It costs only Rs.14,499 and the Note 2 costs Rs.36,499 and it’s smaller than the PIII. The device runs stock Android of version 4.1.1 which is Jelly Bean when most of the Indian phablets around are still on 4.0.4 version of the Open Source software.

Some of the specifications are:

Phew! those are some specs for a phablet on budget. But just before you think that this is the one you were going to buy, just check out the Karbonn A30. It has similar specifications, runs Android 4.0.4 but costs Rs.3,000 less than the Byond flagship. To sweeten the deal, Karbonn gives you a spare back cover and a leather carrying case. But then, this one has a bigger size, a newer version of Android is quite slim too. You would not regret your choice in either of the cases.