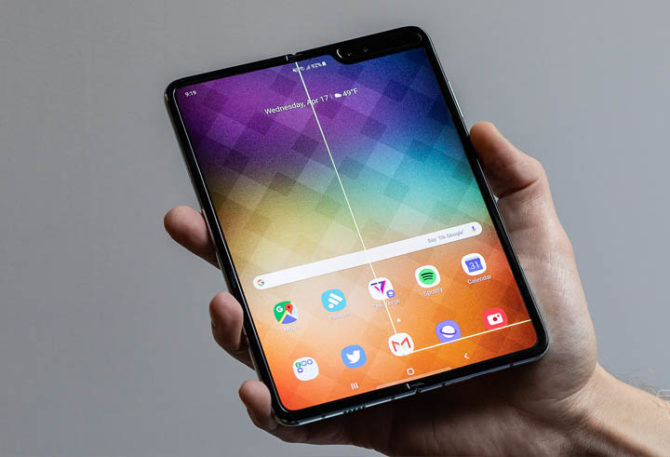 According to the latest reports, several units of the foldable smartphone have suffered damage to their displays. The screen seems to be either cracking or flickering. Removal of a protective layer of its main display is said to be causing damage. The protective layer on the main display is designed to protect the screen from unintended scratches.

Samsung is currently investigating the damage reports. While the company has closed pre-orders for the Galaxy Fold, there is no change to the release schedule as yet. The South Korean giant plans to bring at least 1 million Galaxy Fold units to the market.

“A limited number of early Galaxy Fold samples were provided to the media for review. We have received a few reports regarding the main display on the samples provided. We will thoroughly inspect these units in person to determine the cause of the matter” – Samsung said in a statement.

Damage reports go from ‘completely broken and unusable’ to the appearance of a ‘small bulge’. In another case, a piece of debris that had gotten into the hinge is said to have pressed into the display hard enough to break it.

Overall, the handset seemed to have suffered screen failures without any abnormal usage. Additionally, the damage seems to emerge within a single day of use or two. It is to be noted that not all of the reviewers with broken units removed the plastic film.

Pending investigation, Samsung has started retrieving all Galaxy Fold sample units. The company was expected to launch the new smartphone in the US on April 26. The launch event has now been postponed for an unspecified period of time.

As per recent reports, the damage to the foldable displays might be caused by the impact on exposed areas of the hinges. However, there might be other factors behind the damage. The South Korean giant is said to working hard on nail down the issue and fix it. Meanwhile, it has emailed pre-order customers regarding the delayed launch.

“Your pre-order guarantees your place in the queue for this innovative technology. We’ll update you with more specific shipping information in two weeks,” Samsung said in the email.

Samsung was pretty confident about its foldable design, calling it the ‘future of smartphones’. The company also showcased a video of robots folding Galaxy Fold handsets 200,000 times for its durability test.

The Samsung Galaxy Fold was launched as the ‘future’ of smartphone devices. Several other devices like the Huawei Mate X also sport the foldable design language. We will have to wait and see how practical these models turn out to be.

This is not the first time Samsung is facing trouble with its smartphone units. Previously, the Galaxy Note 7 was recalled due to several cases of units catching fire or exploding (because of defective battery units).

The Samsung Galaxy Fold is priced at $1980 (approx Rs 1,41,300). It (both 4G LTE and 5G variants) will be available in the selected markets from April 26. As of now, there is no information about the Indian price and launch date.

Were you excited about the upcoming foldable smartphone? Will you still go with the Samsung Galaxy Fold? Share your views with us in the comments section below.