Gionee launched its flagship Elife S7 phone in India earlier this month while now the company is said to be working on its next flagship phone. Gionee’s upcoming flagship phone (GN9008) has been spotted on database of benchmarking website named GFXBench. Furthermore, the handset is likely to be called Gionee Elife E8.

According to the listing of the handset on GFXBench, it will be powered by a 64-bit octa-core MediaTek MT6795 processor coupled with 3 GB of RAM. Running Android 5.0 Lollipop, it will feature a 4.6-inch quad-HD display with 2560×1440 pixels resolution.

The handset will sport a 24 mega pixel camera on the rear while there will also be an 8 mega pixel front facing camera onboard. Rear camera features on the handset will include auto focus, flash, face detection, touch focus and HDR photo. Gionee’s upcoming flagship will house 32 GB of inbuilt storage. It will offer Wi-Fi, Bluetooth and NFC as connectivity options.

Rest of the details about battery and expandability though microSD card are unclear at this time and are likely to surface in the coming days. Needless to say, this information should be taken with a pinch of salt since these specifications have not been revealed officially by the company. 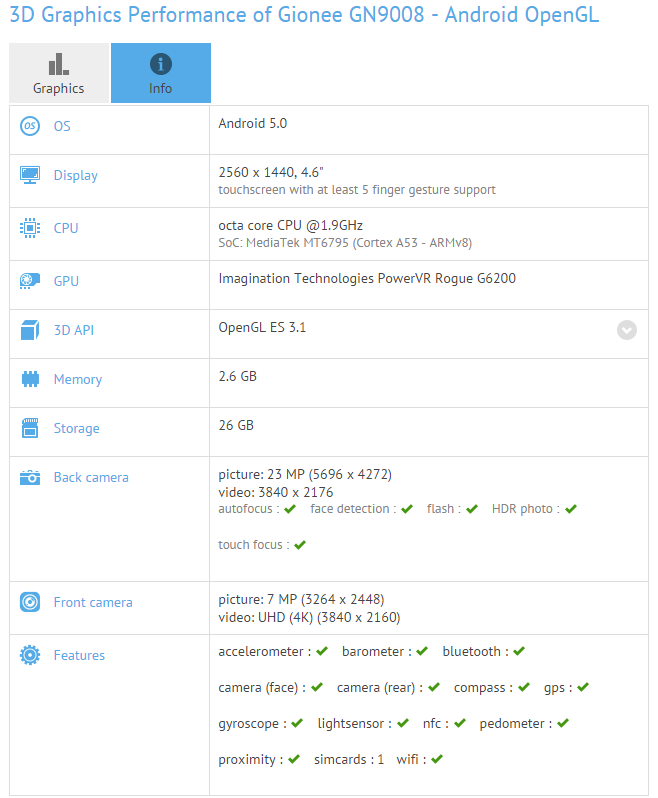