Gionee is all set to launch eight new bezel-less smartphones on November 26. Now, the company has started releasing teasers for upcoming devices. The Gionee F6 and F205 will be among the upcoming smartphones. Both handsets will feature bezel-less display panels. Read more to find about Gionee F205, F6 Price in India, Specifications, and Features 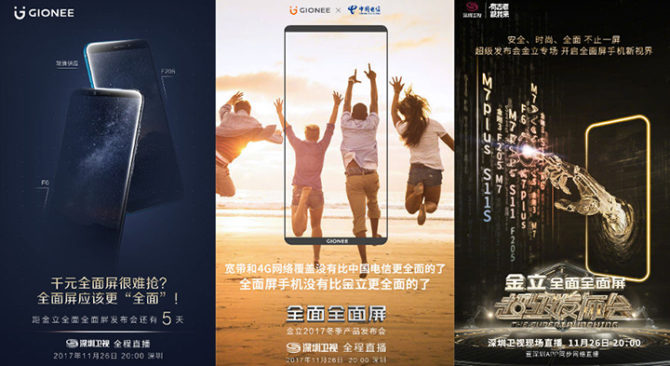 Gionee teased the upcoming bezel-less smartphones via its official Weibo account. Both Gionee F6 and F205 will be launched at an event in Shenzhen, China on November 26. As of now, there is no information about the Indian launch and price.

Also read: Gionee To Launch 8 Bezel-less Smartphones On Nov 26 – All We Know So Far

While the official teasers don’t reveal any details about the upcoming smartphone, the Gionee F205 was spotted on a TENAA (Chinese certification authority) listing. Both handsets will feature a FullView display with minimal bezels and an 18:9 aspect ratio.

As per latest leaks and rumors, the Gionee F205 will sport a 5.0-inch display. It will be powered by a quad-core MediaTek MT6739 processor along with 2GB RAM and 16GB internal storage. The new handset is expected to be backed by a 2,970mAh battery.

On the camera front, the new smartphone is tipped to feature an 8-megapixel rear camera and 5-megapixel front camera. It is likely to run Android 7.1.1 Nougat operating system with a custom skin on top.

Gionee is planning to capture the bezel-less smartphone segment with new devices in different sizes and price segments. Details of some of these devices have already surfaced online. The Gionee S11 is tipped to feature a 6-inch display with full-HD+ resolution. It is said to be powered by an octa-core MediaTek MT6763 processor. On the camera front, the upcoming handset is expected to sport a 16-megapixel rear camera and a 5-megapixel front camera.

The Gionee M7 Plus is expected to feature a 6.43-inch FullView AMOLED display with full HD+ resolution and 2.5D curved glass display. It will be powered by an octa-core Snapdragon 660 processor along with Adreno 512 GPU, 6GB RAM, and 64GB internal storage. On the camera front, the upcoming Gionee M7 Plus is said to feature a dual camera setup with a dual-tone LED flash. The handset is also tipped to feature an 8MP front-facing camera

The high-end Gionee M2018 is likely to come with 6GB RAM and 64GB internal storage. The premium device is said to feature a leather back panel. It is expected to run Android Nougat OS with Gionee’s proprietary Amigo OS skin on top.