Gionee has launched three new smartphones in the Indian market – S11 Lite, F205, and A1 Lite. The budget smartphones come in multiple color options and screen sizes. The company is also expected to launch its Gionee S11 (with four cameras) smartphone soon in India. Read more to find about Gionee S11 Lite, F205, A1 Lite Price in India, Specifications, and Features 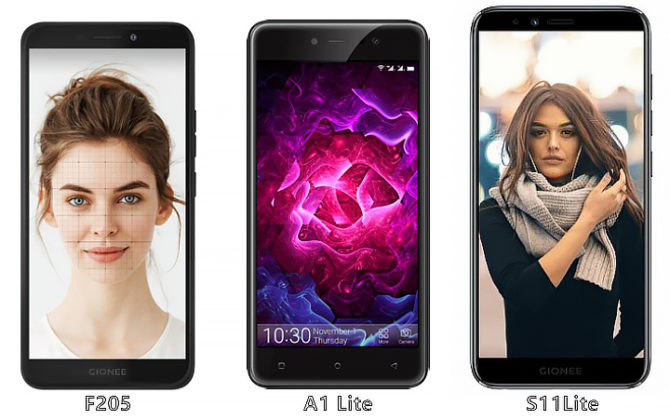 The new smartphone features a 5.7-inch display with HD+ (720 x 1440 pixels) resolution and 2.5D curved tempered glass protection. It is powered by a Qualcomm Snapdragon 430 Octa-core processor along with 4GB RAM and 32GB internal storage.

In terms of optics, the Gionee S11 Lite sports a dual camera setup on the back. It combines a 13MP primary RGB sensor and a 2MP depth camera. For selfies and video calling, the handset comes with a 16MP front camera. It is backed by a 3030mAh Li-ion battery.

In terms of optics, the Gionee F205 comes with an 8MP rear camera and a 5MP front camera. It is backed by a 2670mAh Li-ion battery. Connectivity options include 4G, VoLTE, 3G, Wi-Fi, and Bluetooth.

The budget smartphone features a 5.3-inch display with HD (1280 x 720 pixels) resolution. It is powered by a MediaTek MT6753V octa-core processor and 3GB RAM. The 32GB internal storage can be further expanded (up to 256GB) via a micro SD card slot.

The Gionee A1 Lite runs Android 7.0 Nougat operating system. It is backed by a 4,000mAh battery. In terms of optics, the new handset comes with a 13-megapixel rear camera and a 20-megapixel front camera.

What do you think of the price and specs of new Gionee smartphones? Will you consider picking up one of the new three handsets? Share your views with us in the comments section below.