If we believe on @evleaks, then we are going to see a Red Nexus 5 phone from LG. No details about availability and pricing but only an image of red Nexus 5, nothing else. On 31 January the tipster posted a photo of Red Nexus 5 on its twitter page saying Google Nexus 5, in red, by LG. Till now, Google usually launches Nexus devices in only Black and white colours only. But if rumours were true then we will have more colour options in Nexus devices. 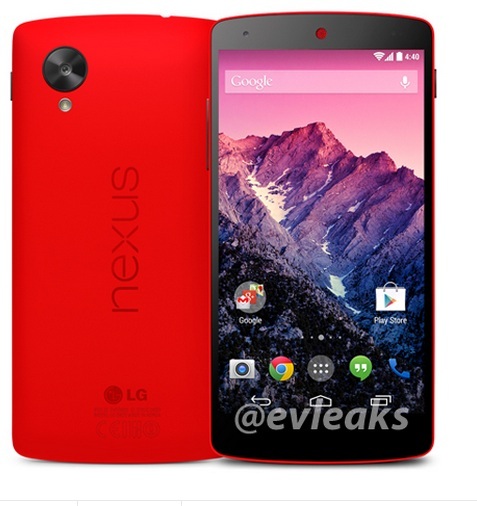 As evleaks mentioned on its twitter page,” Google Nexus 5, in red, by LG.”  that’s all we have right now. So stay tuned.

The Google’s Nexus 5 was launched last year in November in India with a price tag INR 28,999. It runs on latest operating system from Google that is 4.4 Kitkat along with 2GB RAM on board and 2.3GHz Qualcomm Snapdragon 800 processor along with Adreno 330 GPU for better graphics performance. The phone was launched in two memory options 16GB and 32GB.

It has 4.95-inch full HD IPS Corning Gorilla Glass 3 display. It also supports wireless charging too. On Connectivity, it has Wi-Fi, Bluetooth and NFC