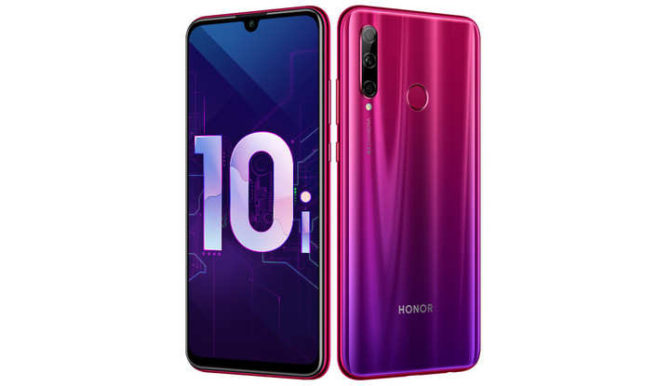 The Honor 10i smartphone has been quietly listed in Russia. As of now, there is no information about the Indian price and availability. The Honor 10 Lite is priced in India at Rs 13,999 for the 4GB RAM variant. The 6GB RAM model comes with a price tag at Rs 17,999.

The new smartphone is powered by an octa-core HiSilicon Kirin 710 processor along with 4GB RAM and 128GB internal storage. As per recent TENAA listings, the Honor 10i will also be launched in Russia with 6GB RAM and 128GB storage options.

In terms of optics, the Honor 10i sports a triple rear camera setup on the back (24-megapixel, f/1.8 aperture + 8-megapixel + 2-megapixel, ultra-wide-angle). For selfies and video calling, it features an AI-powered 32-megapixel front camera. It is backed by a 3,400mAh battery.

The Honor 10i will sport a 6.21-inch display with a full-HD+ resolution (1080 x 2340 pixels),19.5:9 aspect ratio, and waterdrop-shaped notch. It comes in three color options. While the Red and Blue variants come with the 3D gradient finish, the Black variant sports a simple 3D finish.

Apart from the Honor 10i, the Huawei sub-brand is also tipped to be working on a new high-end device. The Honor 20 is said to come with a HiSilicon Kirin 980 SoC, a 3,650mAh battery, and triple rear camera setup. We will know more in the coming days.

The Honor 10 Lite sports a 6.21-inch full-HD+ display with a pixel density of 415ppi. It is powered by a 2.2GHz octa-core Kirn 710 processor and 4GB/ 6GB LPDDR4X RAM. The 64GB internal storage can be further expanded via microSD card (up to 512GB). The GPU Turbo 2.0 technology reduces lagging and frame drops. It also enables a 60fps frame rate. In the power department, the Honor handset will be backed by a 3,400mAh battery.

What do you think of the Honor 10i smartphone? Share your views with us in the comments section below.