Idea Cellular launched the successor of Idea Aurus, new device is being called Idea Aurus 2. Aurus 2 is the first android jelly bean device  launched by Idea. Before it Idea Cellular has launched six 3G devices. Idea is launching affordable devices for its 2G customers who want  to upgrade to 3G in semi-urban and rural markets, across the country. This dual SIM smartphone comes with an attractive data usage offer for Idea 3G users. For a pack of Rs. 261, Aurus 2 users can get 1.6 GB of 3G data and Idea TV subscription free for the first 3 months. Idea smartphones are available at retail stores and Idea outlets across the country. IDEA Cellular is India’s third largest mobile operator, with over 121 million subscribers. 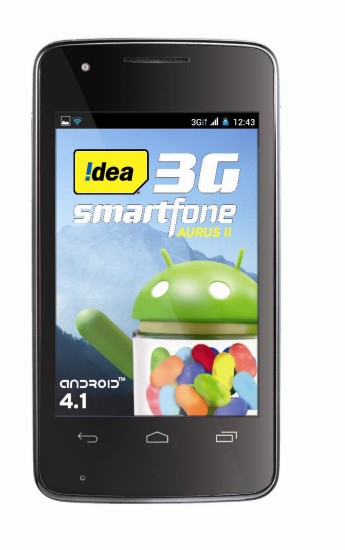 The Aurus 2 is available at the price INR 6,490. It has 3.5 inch capacitive touch screen along with 320 x 480 pixel resolution. It has android jelly bean operating system and is powered by 1 GHz processor along with 512 MB RAM and 4 GB internal memory which can be expanded up to 32 GB via memory card.  There are two cameras in this phone, at the back there is a 3.2 MP camera for capturing images, and at front there is a VGA camera for video calling. The phone is dual SIM but whether its dual standby or not, its not specified.

While releasing the new phone into the market, Mr. Sashi Shankar, Chief Marketing Officer – Idea Cellular, said, “Idea focuses on bringing the best of the 3G technology at affordable price to our subscribers, thereby maintaining an equilibrium between both cost and technology. We are encouraged by the response to our 3G smartphones, having sold over 300,000 3G smartphones over the last one year. We expect Aurus 2 to meet the consumers’ expectations for entertainment, e-mail connectivity, social networking, and browsing of smart apps and widgets. We hope the new addition to our portfolio will continue to boost the sales of our 3G smartphones and drive data usage on our network.”