Is Microsoft is monitoring your accounts and selling data to government ?

Yesterday there was a tweet on Skype’s Twitter account saying” Don’t use Microsoft emails (Hotmail, outlook), they are monitoring your accounts and selling the data to the governments. More details soon #SEA.”  This tweet was retweeted more than 8000 times and remain online accessible for more than two hours until Skype officially declared that their Twitter account was compromised and after that deleted that tweet. 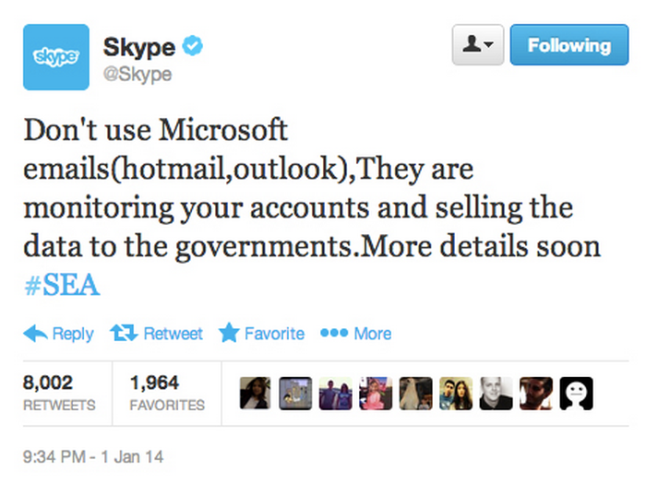 So this group was involved in previous hacks too. But the new year was not good for Skype. Because later also find out that this group also hit Facebook account of Skype and with also Skype’s Blog too. Skype did not comment about Facebook account and their blog. But we can guess it because both of these account was not working properly, so may be they have been compromised too.

But today on Skype’s Twitter account they have clearly mentioned that” You may have noticed our social media properties were targeted today. No user info was compromised. We’re sorry for the inconvenience.”

So according to Skype all user’s information is safe. We did notice that Microsoft has not commented in this regard. Because Microsoft owns Skype.  And in this hack, hackers target was Microsoft. So as Microsoft targeted  they need to clear the matter.

Syrian Electronic Army posted on their own Twitter account” “You can thank Microsoft for monitoring your accounts/emails using this details,” and they also mentioned Microsoft CEO Steve Ballmer’s contact information.

This all matter is related to NSA’s ( National Security Agency) PRISM surveillance program. According to PRISM Surveillance program NSA and FBI can access the system of companies like Google, Facebook, Microsoft, Apple, Yahoo, Skype and others. So that they can spy on people’s data like audio and video chat. This matter is also related to Edward Snowden who leaked NSA’s documents previously.

And according to sources another tweet is posted on same said, ”Stop Spying on People”, was removed. We have to wait until Microsoft comments on this matter.