Karbonn is becoming a key player in the Indian smartphone and tablet arena when it comes to offering class leading products at rock bottom prices. Karbonn has just launched another budget tablet in the Indian market which it has named as Karbonn Ta-Fone A34 for Rs.7,290 and it is available via online retailer Infibeam.com and the retailer is offering an inaugral discount of another Rs.440 if you use the code”KAR440″.

Karbonn Ta-Fone A34 comes with a 7 inch capacitive display which has a resolution of 800×480 pixels. The main selling point of the tablet will be the Dual SIM option it brings along with it. It can work with two GSM sim cards which makes it quite a handy tablet. It runs on a slightly older version of Android, Ice Cream Sandwich 4.0.4 but we can’t ask them for much at this price point. It offers voice calling too which makes those two sim cards all the more functional. 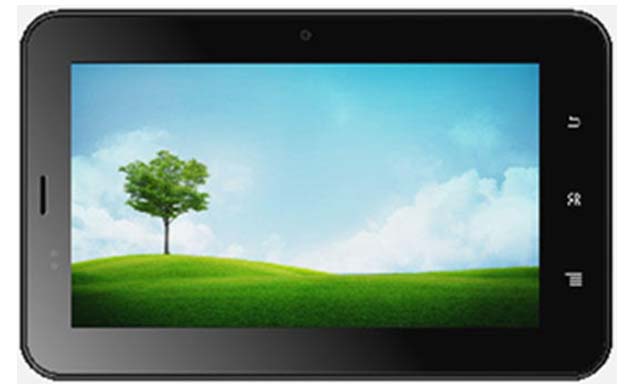 You get a 2 megapixel shooter at the back and a VGA camera on the front of the tablet which derives juice from a 3,000 mAH battery unit. It gets a 4GB internal storage out of which around 2GB will be available for your accessibility. You need not worry as the tablet will offer a microSD card slot to expand the memory by another 32GB. The tablet has not been launched officially by Karbonn but since its available now, we can expect an official announcement in a week or so from now.

It has a 1GHz Cortex A9 processor doing the duty in the processing department and you get Wi-Fi, Bluetooth and Edge as well in the connectivity department. There’s half a gig of RAM on offer but the only thing we think it missed out on is 3G connectivity. But 3G connectivity is not very popular in the country so you are not missing out on much. The tablet offers dual sim functionality with calling abilities and does not cost a fortune as well. So overall, it’s a nice package deal.