Kodak has unveiled its first ever smartphone at CES 2015, dubbed as Kodak IM5 smartphone. This smartphone has been built  by a UK based handset manufacturer Bullitt Mobile. Since Kodak is more into providing imaging services and solutions, anyone would expect its recently announced smartphone IM5 with some exceptional technologies, but Kodak has turned our hopes down on this. This device comes with 13 mega pixel rear camera and 5 mega pixel front facing camera which is very common in smartphones these days. Read on for more details on features, specifications, pricing and availability of Kodak IM5 smartphone. 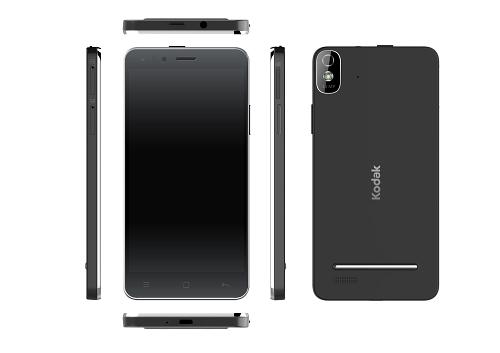 IM5 is powered by 1.7 GHz Octa-Core Mediatek processor coupled with 1 GB of RAM. It runs on Android 4.4 KitKat operating system which is upgradeable to next Android release Android 5.0 Lollipop. It features a 5 inch IPS display. For storage, it entails 8 GB of internal memory which is expandable via microSD card. On imaging front, it sports 13 mega pixel rear camera with auto focus and LED flash while it sports a 5 mega pixel camera in the front. It weighs just 120 grams while battery capacity remains unknown as of now.

This smartphone comes with an intuitive user interface, making it easy and convenient for users to work upon. The simplified user interface allows the users to easily access various functions on this device. Camera features included on this device allow easy capturing and sharing of images. In addition to Google Play, this device is equipped with its own app store named as ‘Apps’ offering an easy access to various apps by the users.

Oliver Schulte, CEO of Bullitt Mobile , said, “This is a phone for consumers who appreciate the value and heritage of the Kodak brand. It looks great, is easy to use and offers real value for money.”

Eileen Murphy, VP Brand Licensing at Kodak said, “Too many memories stay stuck on mobile phones, often because the process for sharing them is too complicated for users; that’s why we’ve partnered on the IM5, the first device in a range of mobile products that takes our heritage and experience in photographic technology and combines it with Bullitt’s expertise in designing high-quality devices for a specific target consumer.”

This device has been priced at $249 (Rs. 15,800 approximately) and will be rolled out for sale in Europe first at the end of Q1 2015. Details about pricing and availability in global markets have not been revealed yet. Stay tuned with us for more updates.