Konka has just announced their slimmest and cheapest offering for the Indian smartphone market and the company is promoting the device as a youth centric device. The company claims to have brought the best of fashion, lifestyle and bling into this smartphone to make it a winner in the budget segment. The device we are talking about here is the Konka Viva 5660 which is expected to bring smartphone experience at the price of a feature phone. 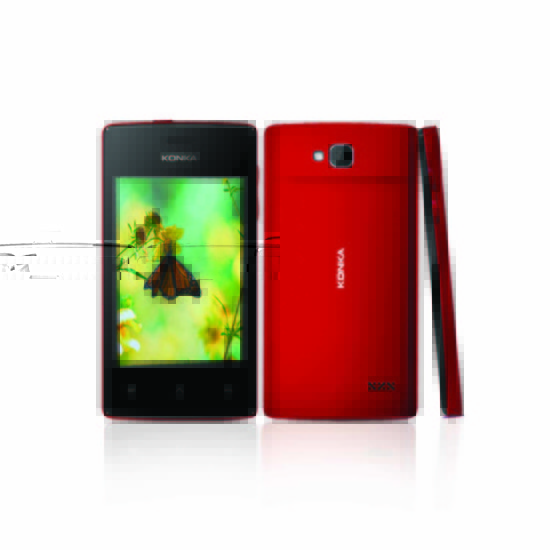 The smartphone has a 3.5 inch IPS display with a display resolution of 480×320 pixels. The smartphone will run on a slightly older version of Android, 2.3 Gingerbread but you can not expect Jelly Bean at this price either. The device has a thickness of just 8.2mm, which makes it one of the slimmest ones out there and at the same time, makes the device easily pocketable. It is being offered in a white colour and a dual tone black and red colour. It will come with a 2.0 megapixel camera at the rear which will be complemented well by the LED flash next to it. An 1,100 mAH battery will be powering the smartphone. The company has not stated the exact price of the device but has stated that it will be priced well under the Rs.5,000 mark, which would make it quite a value for monet product in that segment. This is the company’s first budget smartphone offering as well.

It will be powered by a single core 1GHz processor of Cortex A5 architecture. The device will come with Wi-Fi and Bluetooth connectivity but will miss out on 3G connectivity. It will come with an internal memory of 512 MB with an option to expand it being made available as well. The RAM will stand at 250MB. Konka is not a familiar name with the Indians who usually turn to companies like Micromax and Karbonn for budget smartphones but if Konka’s products deliver what company promises, Konka might get a lot of Indian takers as well.