Lava India listed an entry level smartphone on their official website. The dual SIM smartphone get listed without price and availability. The smartphone is listed in two colours option White and Dark Blue. And we can expect, this smartphone will hit market soon under INR 5000. 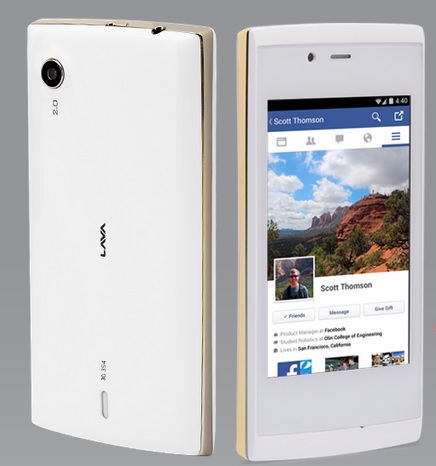 Talking about the specifications, the 11.8mm thick devices weigh 103.8 gram. As we can see in images, the 3.5-inch display screen looks good on a white plastic body along with thick golden bezels at top. So we can expect a decent designed smartphone around INR 5000 in Indian market. The Lava 3G 354 has 320*480pixel resolution display.

Inside the smartphone, there is a 1GHz dual core processor from an unknown manufacturer. The smartphone has 256MB RAM, which is pretty low, but from an entry level device, what can we expect more. The smartphone is running on Android 4.2 Jelly bean operating system out of the box.

On the back of the smartphone, there is a 2-megapixel camera along with a VGA front camera for video calling and self-portrait. There is 2GB internal storage in the device along with up to 32GB memory card support.

On the connectivity front, there is 2G, 3G, Wi-Fi, Bluetooth but no mention about GPS. And as it is an entry level smartphone, maybe there will be a lack of GPS. But the sole purpose of this smartphone is, providing 3G support at this low price point. On the other hand, the smartphone is a dual SIM smartphone with both the SIM GSM connectivity.

Recently, we reported that Lava launched a dual SIM 3G calling tablet Lava IvaryS in Indian market worth INR 8,499. The tablet sports a 7-inch multi-touch capacitive display with the resolution of 1024*600 pixel resolution. The tablet has 1.3GHz dual core processor from MediaTek along with Mali 400 GPU. It comes with 1GB of RAM. The tablet has 4GB of internal storage along with 32GB memory card support. On the back of the smartphone there is a 3.2-megapixel camera along with flash. There is a VGA front camera too for video calling. The Tablet comes with 2800mAh battery.