Lenovo is all set to launch a successor to its K8 Note handset. The company has already started sending invites for a launch event. The event invites come with a tagline – ‘The Killer Returns’ and hint at a metallic frame. It might be called K9 Note or K8 Note (2018). Read more to find about Lenovo K8 Note (2018) Price in India, Specifications, and Features 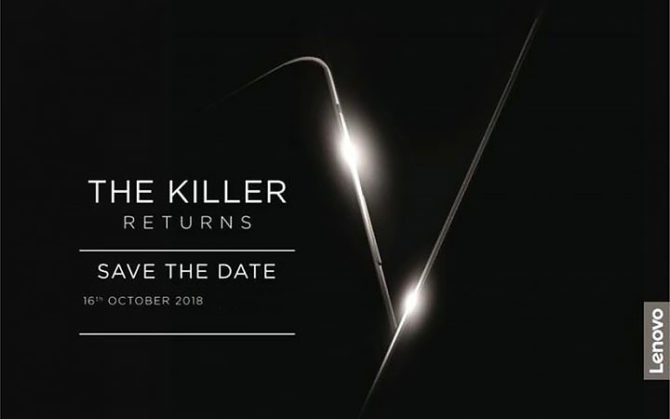 The Lenovo K8 Note (2018) will be launched on October 16 at an event in New Delhi. As of now, there is no information about the price of the upcoming handset.

The upcoming handset is likely to feature a metallic frame and rounded corners. However, there is no information about the specs and features of the K8 Note (2018). More details are expected to emerge in the coming days.

On the camera front, the K8 Note sports a 13-megapixel front camera with f/2.0 aperture, a five element lens and a LED flash. The dual camera setup on the back includes a 13-megapixel primary sensor and a 5-megapixel depth sensor. Carrying forward the Lenovo Note series tradition, the K8 Note is backed by a huge 4,000mAh non-removable battery.

The Lenovo K8 Note comes in Fine Gold and Venom Black color options. It measures 154.5 x 75.9 x 8.5mm and weighs 180 grams. The fingerprint sensor is placed on the back panel, below the dual camera setup. Other sensors on the smartphone include an accelerometer, ambient light sensor, gyroscope, magnetometer, and proximity sensor.