Lenovo is all set to launch a premium variant of its Z5 smartphone. It has released several teasers for the upcoming handset. The Lenovo Z5 Pro will sport a camera slider for front camera (similar to the Oppo Find X and the recently launched Xiaomi Mi Mix 3). Additional highlights include an in-display fingerprint scanner. Read more to find about Lenovo Z5 Pro Price in India, Specifications, and Features 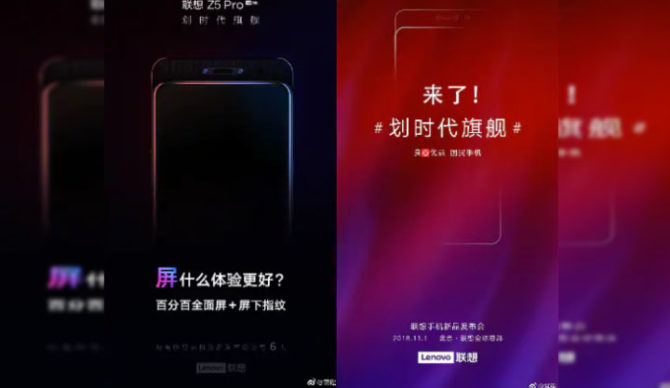 As per recent teasers and posters, the Lenovo Z5 Pro will be launched on November 1st. Previously, it was expected to arrive on October 1. As of now, there is no information about the price of the upcoming handset.

The upcoming handset is expected to be an upgraded version of the Lenovo Z5. As per recent reports, it will sport a notch less display with a camera slider for two front camera sensors. It will also sport an in-display fingerprint scanner.

While the company has not revealed much information about the specs and features, the Android handset is expected to come with large battery and storage (4TB). Overall, we can expect a more promising device than the Lenovo Z5.

The Lenovo Z5 sports a 6.2-inch IPS LCD display with a resolution of 2246 × 1080 pixels. It features a 19:9 aspect ratio, iPhone-like notch at the top and a 90 percent screen-to-body ratio. The mid-range handset is powered by a 1.8GHz Qualcomm Snapdragon 636 processor and Adreno 509 GPU. The internal storage cannot be further expanded via a microSD card slot.

In terms of optics, the Lenovo Z5 comes with a dual camera setup (16MP primary sensor with a f/2.0 aperture + 8MP secondary sensor) on the back. It is can capture 4K videos at 30fps. Additional features include AI Portrait and AI night. The device also features an 8MP front camera for selfies and video calls.

The Lenovo Z5 runs Android 8.1 Oreo operating system out of the box with Lenovo’s ZUI 4.-0 custom skin on top. Features include Full U-Touch 4.0 Screen gestures, AI voice commands, and automatic call answer via gestures. The has also promised an upgrade to the upcoming Android P version update. Sensors on the device include a Light sensor, Proximity sensor, Accelerometer, Compass, Gyroscope.