LG is reportedly working on a new smartphone. An unannounced phone dubbed the LG F600L smartphone has been spotted on a benchmarking website. According to the website, the LG F600L will come with a hexa-core Snapdragon 808 processor clocked at 1.44GHz paired with 4GB of RAM.

LG’s latest flagship smartphone, LG G4 is also powered by a Hexa-Core Qualcomm Snapdragon 808 processor, hinting that LG F600L could be an upgraded variant of the flagship phone. The upcoming device will however pack 4GB of RAM as opposed to 3GB of RAM of G4. The device could also be the Nexus 5 (2015) phone, since LG is said to be working on the same device. 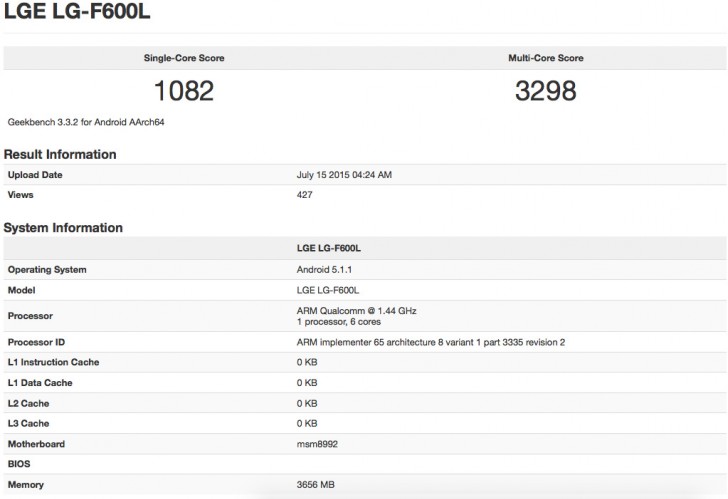 There is no word on pricing and availability of the device as of now. Since LG F600L appears to be just a model number, it is also not known what the company plans to name its forthcoming smartphone.

Rest of the details about hardware specifications of the F600L are not known yet and are likely to surface in the coming days. The LG F600L smartphone could be some variant of LG G4 or it could be the LG made Nexus 5 (2015) or it could be a completely different phone. Within few weeks from now we will get to know what LG is actually working on.

We will update you as soon as more information about the device will be made available. Stay tuned with us for more developments on this story!