LG’s latest flagship phone- LG G4 is one of the most anticipated smartphones of the year 2015 which certainly does not need much introduction. It comes with improved design, better screen resolution and improved camera over its predecessor. The handset also boasts of its optional leather stitched back. The device is solid from outside as well as from inside. In fact, there is a lot more to it than just being solid in aesthetics and specifications.

But is that all what the tag of being a ‘flagship phone’ requires? Does the LG G4 lives up to the expectations of its fans? Does it encompass all those features which a flagship must have? Find out in our comprehensive LG G4 Review report.

We used the device for a week and here’s our LG G4 Review:

LG has kept the packaging simple and neat. The The rectangular white colored box comes with LG G4 branding. 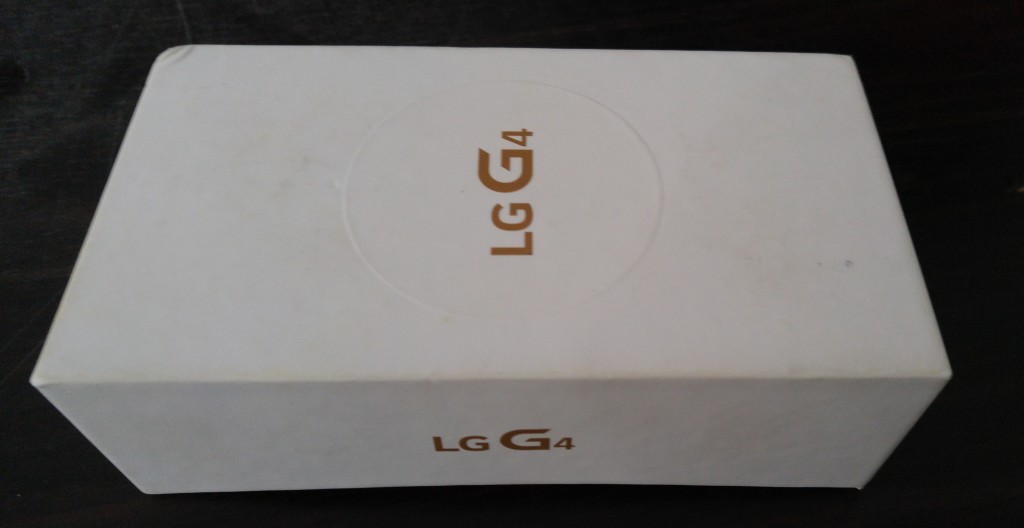 While the LG G4 inherits design cues from its predecessor LG G3, it is comparatively larger and wider with 148.9 x 76.1 x 6.3 dimensions. It gets curved removable back flaunting cutting edge diamond design which narrows down at edges. The power button and volume rocker are placed on the rear below camera and can be comfortably controlled using index finger. Feel of both power button and volume rocker are different front each other so that user can distinguish between them while pressing. Former is smooth to touch while latter incorporates dotted pattern. At the bottom of the phone there is LG branding and at the rear there is G4 branding alongside speaker mesh. 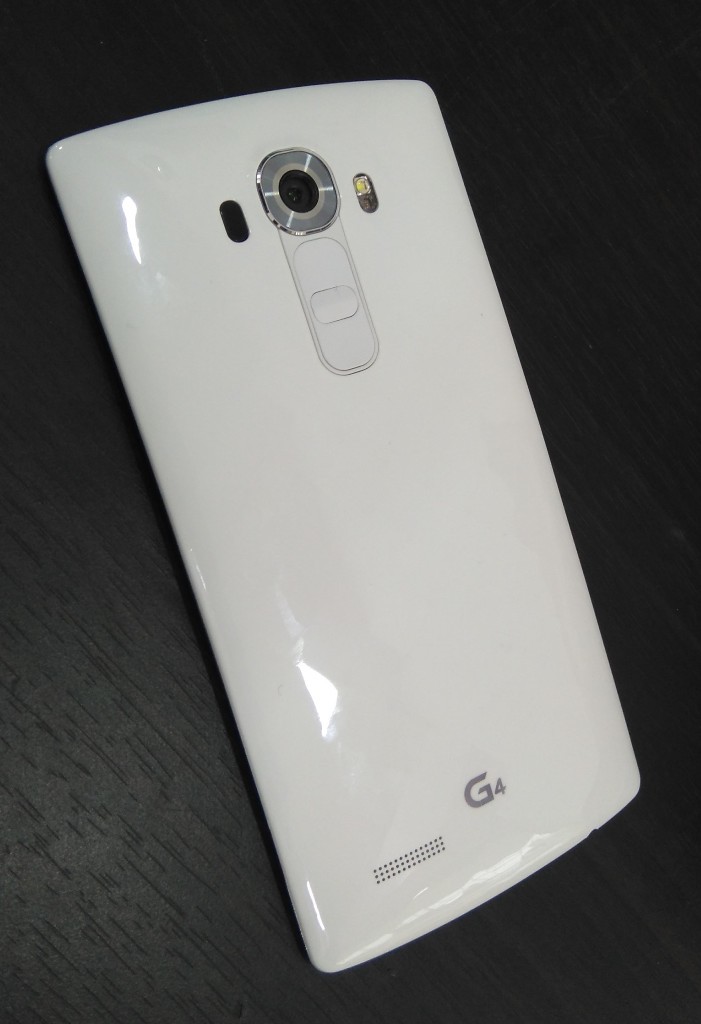 Based on rear panel, the LG G4 comes in two options- leather and plastic. Plastic rear panels come in  Ceramic White, Metallic Gray and Gold. We got a Ceramic White colored variant for review. Sadly, the device does not look as premium as other flagship smartphones such as Samsung Galaxy S6.

At the time of LG G3’s launch, LG was one the first smartphone manufacturers to incorporate a Quad HD display. The LG G4 comes with same display size and resolution. It features a 5.5-inch Quad HD IPS Quantum with resolution of 2560×1440 pixels and pixel density of 538 ppi. LG has used IPS Quantum screen on its latest flagship which is brighter and has more contrast and color accuracy. The display is slightly curved and comes with Gorilla Glass 3 protection and is surrounded by a metal rim. Viewing angles are great and the screen is easily viewable under bright sunlight. 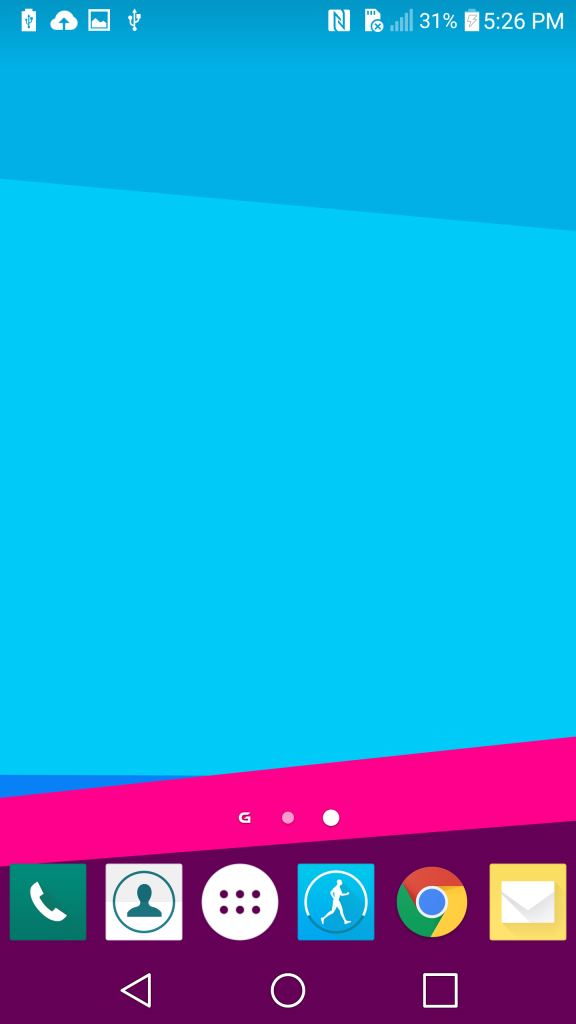 The LG G4 leaves no stones unturned when it comes to performance. It is powered by a powerful 64-bit hexa-core Snapdraon 808 processor paired with 3GB of RAM. It handles heaviest of the applications and games with ease. We did not face any heating issues even after playing graphic intensive games. 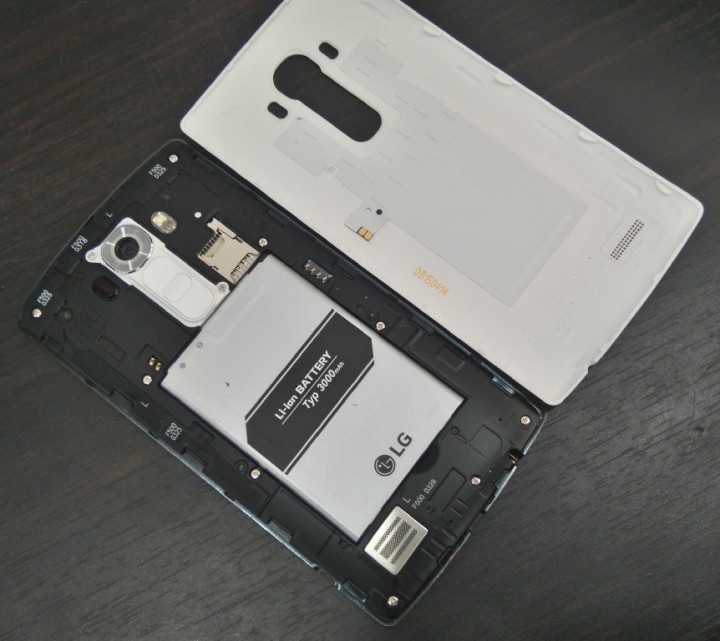 It supports USB OTG so that users can connect pen drives. It also allows users to move apps to microSD card. There is IR blaster as well which lets users to control compatible appliances.

The G4 stands apart from the crowd in camera department. It sports a stunning 16 mega pixel camera on the rear with dual tone LED flash, laser auto focus and Optical Image Stabilization(3-axis) which captures details with great precision.  The f/1.8 aperture makes sure that the images are taken with fast shutter speeds. It supports 4K video recording.

On the front, the phone sports an 8 mega pixel camera. The secondary camera incorporates some gesture controls which makes it easier to click selfies using hand gestures.

Images certainly come out good in proper light but the camera on the G4 does not fail to impress us while clicking images in low light as well. 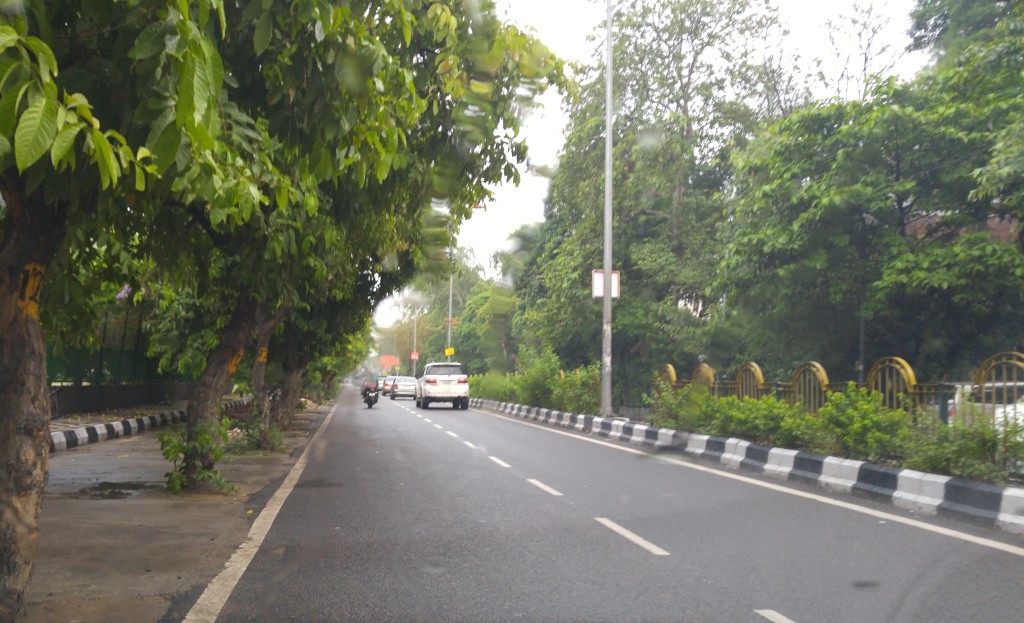 The handset comes with 32GB inbuilt storage out of which around 21GB is user available. It comes with microSD card support which is capable of expanding memory up to 2TB. 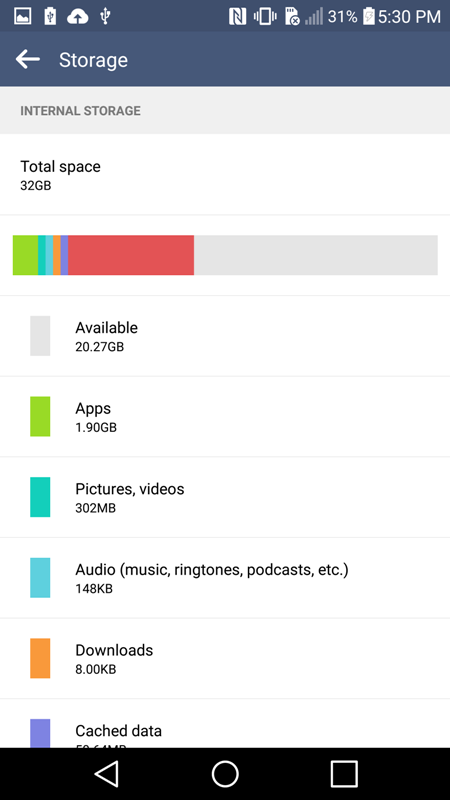 Like the predecessor LG G3, the G4 comes with removable 3000mAh battery. On moderate to high usage (playing graphic intensive games and surfing internet) the battery starts struggling in 12-14 hours. 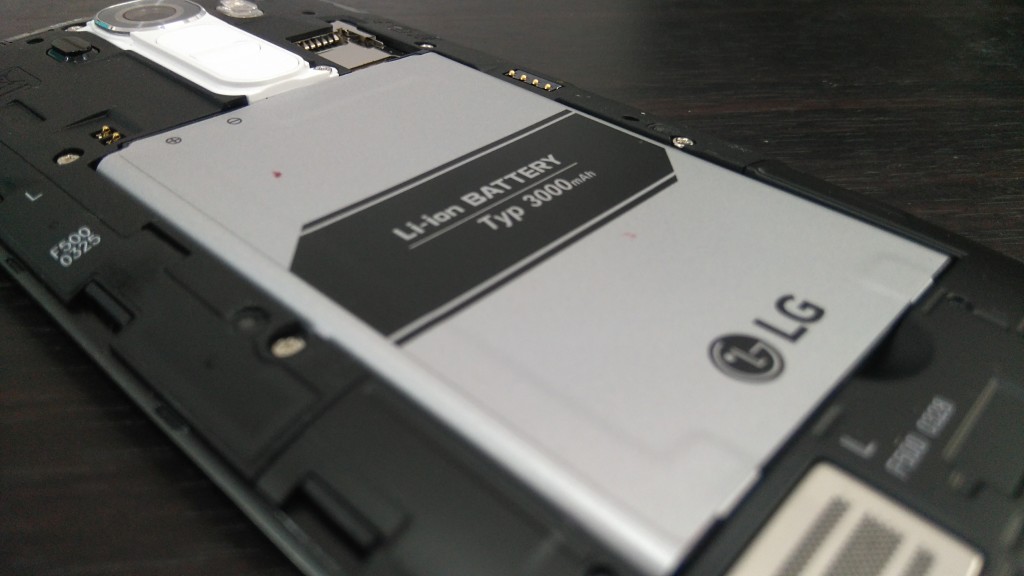 The LG G4 runs Android 5.1 Lollipop wrapped under LG UX 4.0. On software front, it looks similar to its predecessors however there are few enhancements. There is addition of Smart Settings feature which changes the settings of the phone based on users location. For instance, you can set it to automatically change sound profile or turn Bluetooth on or turn Wi-Fi on when at home. Overall, the interface is quite easy to understand and use. 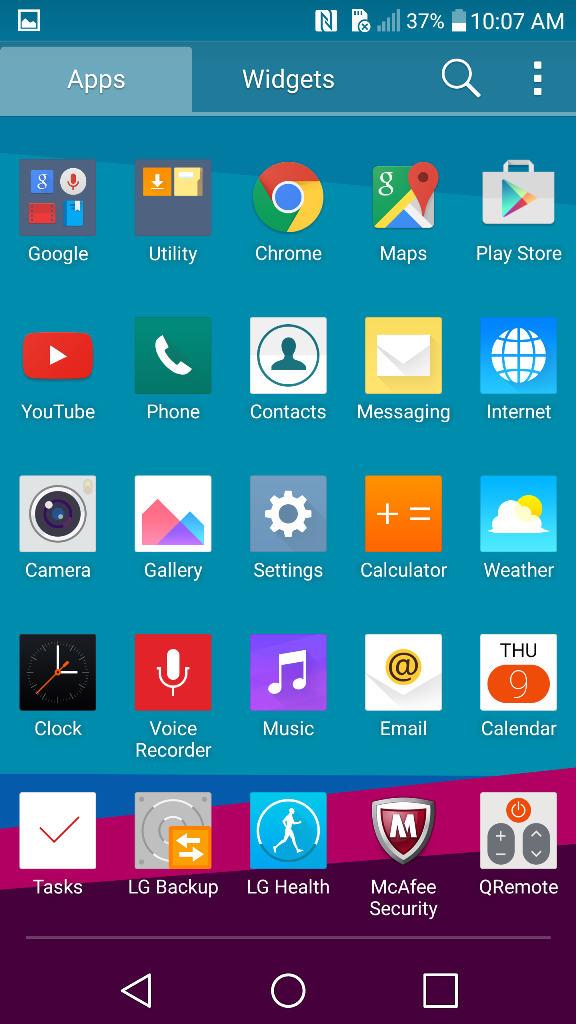 Despite the placement of speaker mesh at the rear of the phone, sound does not get muffled up. Audio quality is fairly good even if the device is placed rear down. 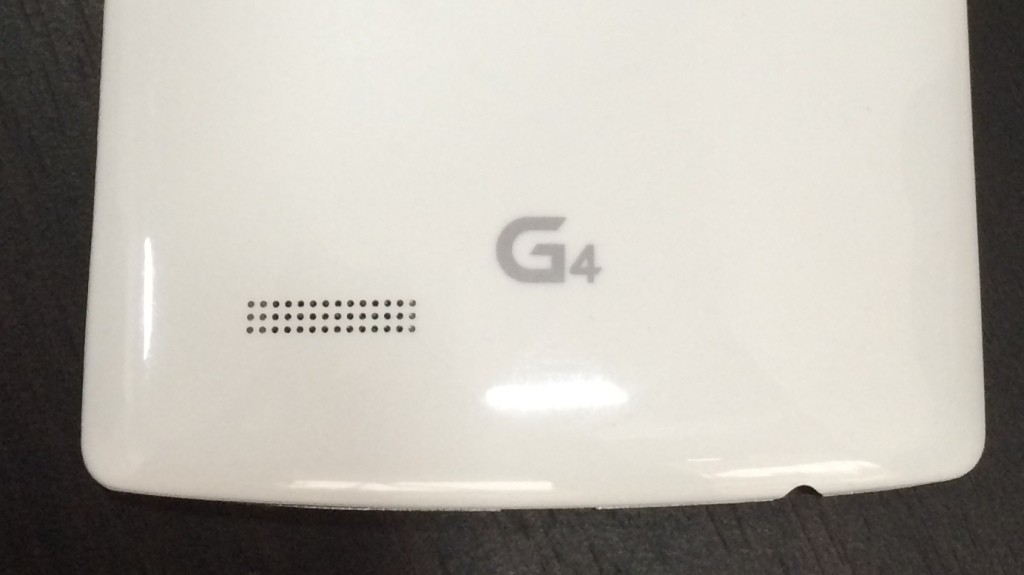 The LG G4 features top of the line hardware specifications set, great camera and user friendly UI. The device carries a price tag of Rs. 51,000 which isn’t surprising considering the premium looks and plethora of features which the device has to offer. It’s PRO’s outweigh its CON’s and the LG G4 certainly is a value for money device. Not only does it revolutionizes the flagship war, but also improves over its predecessor, offering a more refined experience to the users.

Have you tried your hands on LG G4 phone lately? Do you think it’s a good buy? Share your views with us in the comments below!

Note: We tested the International variant of LG G4 which comes with single SIM support as opposed to dual-SIM India variant. Besides, this difference all other specifications of both variants are same. Due to difference in number of SIM slots, the India variant could use more power leading to faster battery drainage.