LG has launched LG G4 metallic variants in the Indian market. Intially launched in Leather Back and Ceramic White versions, the G4 will now also be available in Titanium Black and Gold color options with metallic finish for Rs. 40,000. To recall, LG launched its flagship smartphone LG G4 in India for Rs. 51,000. The device recently got price cut and its price dropped to Rs. 45,000 for Leather Back variant and Rs. 40,000 for Ceramic White variant.

As for specifications, the G4 is powered by a 64-bit 1.8GHz Hexa-Core Qualcomm Snapdragon 808 processor paired with 3GB of RAM. It runs Android 5.1 operating system wrapped under LG UX 4.0 and features a 5.5-inch Quad HD IPS Quantum display with 2560×1440 pixels resolution. 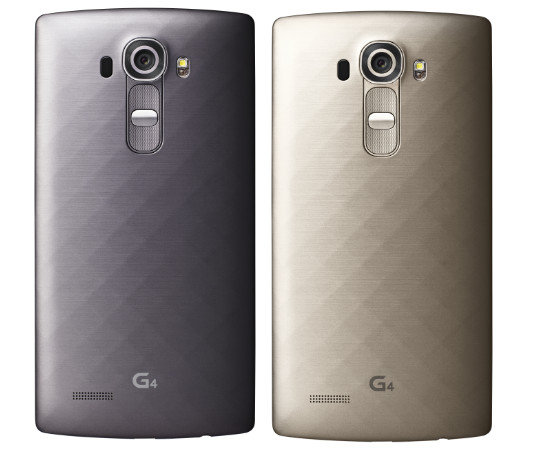 There is 32GB of inbuilt storage onboard which is expandable using microSD card. The smartphone sports a 16 mega pixel camera with dual-tone dual LED flash and OIS on the rear and an 8 mega pixel front facing camera. Backed up by a 3000mAh battery, it measures 148.9 x 76.1 x 6.3 mm in dimensions and weighs 155 grams.

“We have always believed in offering only those products to our consumers that complement their style in making a statement. The G4’s leather back was a step in that direction and we’ve taken it to the next step with this metallic variant of G4. The G4 is our most ambitious product of 2015 and we hope the consumers will continue to show their love for this smartphone, now in an all-new metallic avatar”, said Deepak Jasrotia, Business Head, LG Mobiles India.