LG finally took the wraps off its much anticipated flagship phone LG G4 on Tuesday. The G4 will go on sale starting April 29 in Korea, followed by 180 carriers across the world. Pricing details of the handset have not been revealed yet however we expect it to be priced between Rs. 50,000 to Rs. 55,000. It comes with several improvements over LG’s erstwhile flagship phone G3. The G4 boasts of its impressive features and sports a slightly curved back. But how does the LG G4 compare with its rivals? In this post we have pitted the LG G4 against Samsung Galaxy S6 and HTC One M9+ to ascertain which smartphone is better. Let us take a detailed look on how LG G4 vs Samsung Galaxy S6 vs HTC One M9+ compare with each other in terms of specs, features and price. 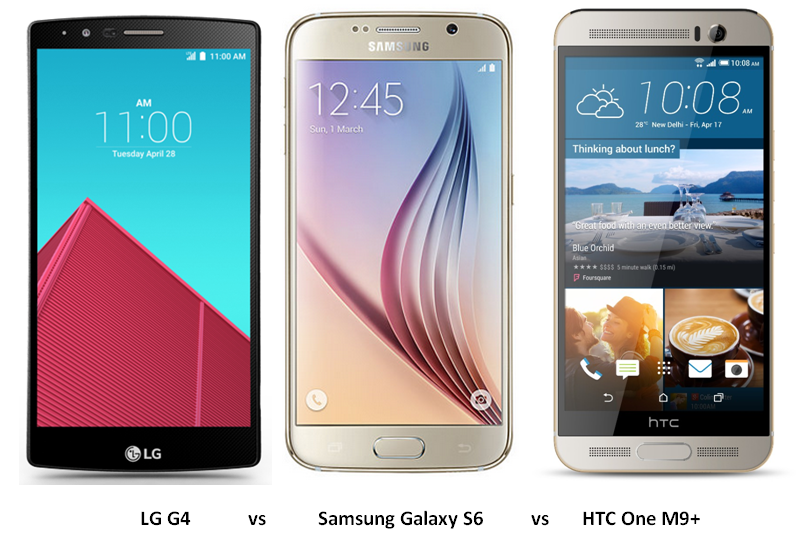 One of the highlights of LG G4 is that it is available in leather back as well as plastic back covers. The leather rear panel makes the handset look even more elegant. The handset also features a slim arc design with a gently curved back. It is the sleekest of the three smartphone measuring mere 6.3 mm in thickness. The Samsung Galaxy S6 exhibits all glass and metal design while HTC One M9+ sports unibody all metallic outfit. They measure 6.8 mm and 9.6 mm in thickness respectively.

LG G4 packs the largest 3000 mAh battery in the lot followed by HTC one M9+ which is backed up by a 2840 mAh and lastly the Samsung Galaxy S6 which comes with a 2550 mAh battery.

None of the smartphones in this comparison fails to impress us, yet the LG G4 apparently has an upper hand over its competitors. LG G4 misses out on fingerprint sensor but it outweighs its rivals in several fronts as it offers  larger display, bigger battery, great camera combination, latest LG UX 4.0 over Android 5.1 operating system while also being sleekest in thickness. However the G4 will actually prove to be better than its rivals and a value for money device if it is launched at lower price or nearly the same price as its rivals.

Which smartphone among LG G4 vs Samsung Galaxy S6 vs HTC One M9+ do you think is better? Share your views with us in the comments below!