Last week, Meizu launched two new flagship smartphones, the Pro 7 and Pro 7 Plus. The new handsets feature a strange design with unique placement of secondary display and a dual-camera setup. Let’s see which of the two flagship Android devices offer more value for money. Read more to find Meizu Pro 7 Vs Meizu Pro 7 Plus: Which Dual-screen Smartphone Is Better? 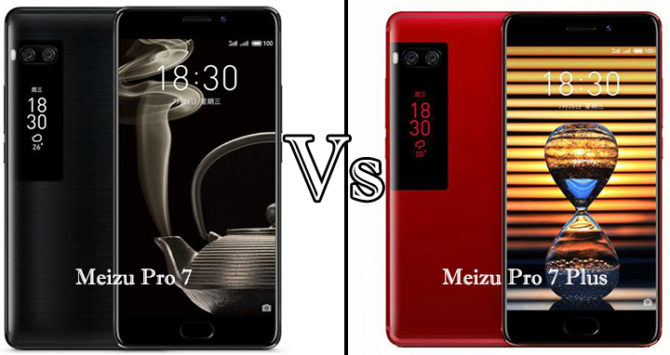 Both handsets will be available for purchase in China from August 5. While Meizu has announced that the new smartphones will soon be launched in 17 more countries, it has not announced an official Indian launch date as yet. Apparently, the France and Spain will be the next to receive the new handsets.

The Meizu Pro 7 features a 5.2-inch Super AMOLED display with Full HD (1080p) resolution. It is powered by a 2.5GHz MediaTek Helio P25 processor along with Mali-T880 GPU, 4GB of RAM, and 64GB internal storage.On the other hand, the Meizu Pro 7 Plus sports a 5.7-inch display with QHD resolution. It is powered by a faster 2.6GHz MediaTek Helio X30 10nm deca-core processor along with PowerVR 7XTP-MP4 GPU and 6GB RAM. The larger handset comes in two internal storage variants – 64GB and 128GB.

On the camera front, both the Meizu Pro 7 and Pro 7 Plus feature a dual-camera setup on the back (two 12-megapixel sensors) and 16-megapixel front- camera. While the Pro 7 comes with a 3000mAh battery, the Pro 7 Plus is backed by a slightly larger 3500mAh battery. Both devices support the company’s mCharge technology for faster charging.

Also read: Nokia 6 Vs Moto G5 Plus Comparison: Which Phone is Better?

Both flagships feature two screens. The second AMOLED display on the back is the USP of the new devices. It is programmed to display notifications, weather, time, music, and other useful information. You can also use the second screen to take selfies via the rear camera.

The Chinese brand is bringing innovative design to the new handsets. Both smartphones sport decent hardware specifications but the Meizu Pro 7 gets a boost in almost all categories. We will have to wait and see how the new handsets perform in real-world scenarios. Which of the two would you go for? Let us know in the comments section below.