Micromax launched its latest smartphone in the Canvas series called the Micromax Canvas Xpress 2 earlier this week. It is priced at Rs. 5,999 and will be available to buy from online retailer Flipkart starting August 4, 2015 while the registrations are now open till August 3, 2015.

It comes loaded with a lot of features and will compete with the likes of HTC Desire 626G Plus and Panasonic Eluga S which pack nearly similar specs. If you are confused between these three smartphones, then read on to find out how Micromax Canvas Xpress 2 vs HTC Desire 626G Plus vs Panasonic Eluga S compare with each other in terms of specifications, features and price. 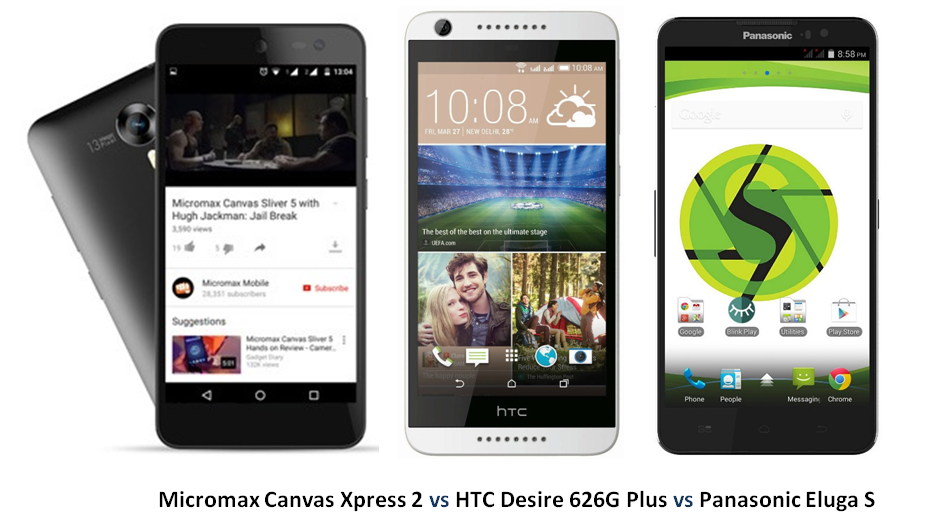 All the three smartphones are powered by an octa-core MediaTek chipset with Micromax Canvas Xpress 2 and Panasonic Eluga S clocked at 1.4GHz while Desire 626G Plus is clocked at 1.7GHz. They feature 1GB of RAM.

This department is a tie since all three smartphones flaunt a 5-inch HD display with 1280×720 pixels resolution.

On storage front, all three phones house 8GB of internal memory with microSD card support up to 32GB.

Connectivity options on all three phones include 3G, Wi-Fi and Bluetooth.

Which handset among Micromax Canvas Xpress 2 vs HTC Desire 626G Plus vs Panasonic Eluga S do you think is better? Share your views with us in the comments section below!