Moto is working on a successor of Moto G6. The upcoming handset is tipped to come with Snapdragon 632 SoC, NFC support and dual-camera setup. Several details of the Moto G7 and Moto G7 Plus have surfaced online. Both devices will feature a waterdrop-shaped notch on the front and a headphone jack at the bottom. Additionally, the Moto G7 Plus will come with OIS support and 27W TurboPower charging. Read more to find about Moto G7 Price in India, Specifications, and Features 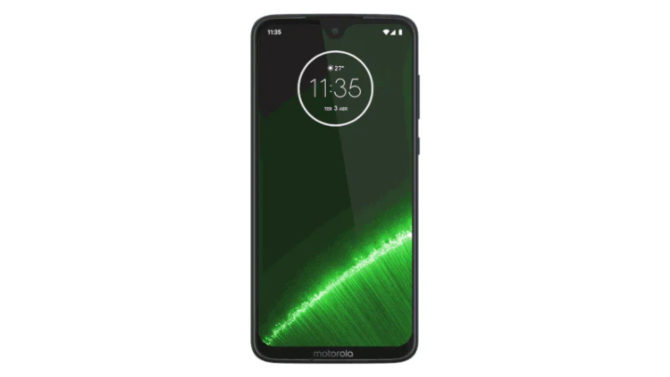 The upcoming handset has now been certified by the Federal Communications Commission in the US. It is expected to arrive sometime this year (February) in four different models (including Moto G7 Play, Moto G7 Plus, and Moto G7 Power).

Lenovo will launch the entire Moto G7 lineup (G7, G7 Play, G7 Power and G7 Plus) on February 7 in Brazil. As of now, there is no confirmation about the Indian price or launch date.

As recently leaked renders suggest, the Moto G7 comes with a waterdrop display notch. There is a prominent chin at the bottom with the Motorola branding. There’s a significant bump for the rear camera setup which includes dual cameras and an LED flash module. The large bottom chin houses the Motorola logo. Whereas a Motorola batwing logo is placed on the back.

The Moto G7 comes with a glossy finish. It measures 157 x 75.3x 8mm (however, the camera bump could make it 9.5mm overall thickness). It sports a fingerprint scanner underneath the company branding (similar to Motorola One Power).

The upcoming device is tipped to run Android 9 Pie out of the box. Additional features include dual-band Wi-Fi support, NFC support, 3.5mm headphone jack, and a USB Type-C port.

The upcoming handset sports many similar specs as the Moto G7. However, it is powered by an octa-core Qualcomm Snapdragon 636 processor along with 4GB/ 6GB RAM and 64GB internal storage. The 3,000mAh battery will also support for 27W TurboPower charging.

Additionally, the dual-camera setup combines a 16-megapixel primary sensor (f/1.7) with a 5-megapixel secondary sensor (f/2.2). It will come with optical image stabilization (OIS) technology. For selfies and video calling, the handset sports a 12-megapixel front camera (f/2.0). The upcoming handset will come in a red color variant.

Other Moto G7 models (including the Moto G7 Play, Moto G7 Plus, and Moto G7 Power) are likely to come with multiple design changes. The Moto G6 did not feature a waterdrop display notch. It was launched with a MaxVision display at Rs 13,999.

In terms of optics, the Moto handset sports a dual-rear camera setup. It combines a 12-megapixel primary sensor and a 5-megapixel secondary sensor with a f/1.8 aperture. Camera features include slow-motion video recording, Bokeh depth-of-field Portrait Mode, a Text Scanner mode, and a Spot Color mode. The 16-megapixel front camera comes with a beautification mode and a group selfie mode.

What do you think of the specs of the upcoming smartphone? Will wait for the Moto G7? Share your thoughts with us in the comments section below.