Motorola launched the third generation of its Moto G smartphone in India last month in July 2015. The handset comes in two variants- one with 1GB of RAM and 8GB of internal memory while the other variant packs 2GB of RAM and 16GB of inbuilt storage. The device is available to buy exclusively from online retailer Flipkart. 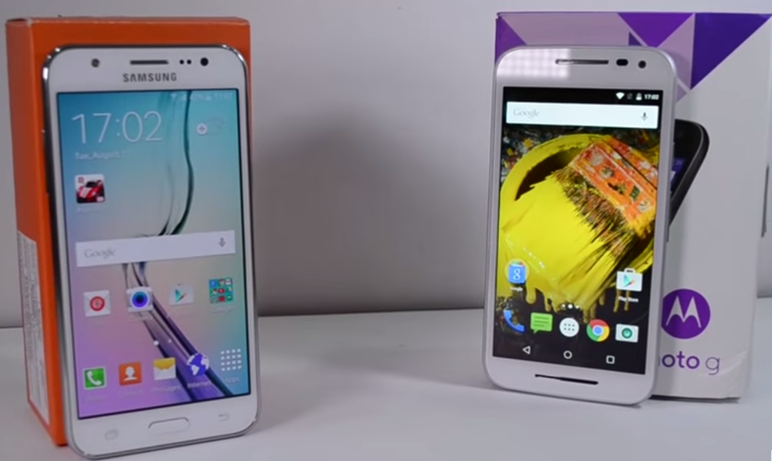 Samsung Galaxy J5 is slim as compared to Motorola Moto but Moto G (2015). The latter comes with IPX7 certification for resistance against water. Moto G third generation measures 142.1×72.4×11.6 mm and weighs 155 grams while Galaxy J5 measures 142.1×71.8×7.9 mm in dimensions and weighs 146 grams. Although both devices look great in aesthetics, Moto G is built with more durable material as opposed to the competitor Galaxy J5.

Both device are powered by a quad-core Qualcomm Snapdragon 410 processor. The Galaxy J5 is clocked at 1.2GHz coupled with 1.5GB of RAM while Moto G (gen 3) is clocked at 1.4GHz paired with 1GB/2GB of RAM. GPU on both devices is Adreno 306.

The Motorola Moto G 3rd Gen comes in two variants based on storage and RAM. One with 1GB of RAM and 8 GB inbuilt storage while other comes with 2GB of RAM and 16GB of internal memory. Both variants support expandable storage up to 32GB using microSD card. Galaxy J7 houses 8GB of inbuilt memory which can be expanded up to 128GB via microSD card.

The Galaxy J5 is backed up by a larger 2600mAh battery as compared to 2470mAh battery of Moto G 3rd Gen.

Although specifications of both devices are closely matched, yet there are some departments in which they excel over each other. If you are looking for a smartphone with better front camera, larger battery and better quality display then Samsung Galaxy J5 is the right device for you. But if you want a device which is durable, water resistant and powerful in performance then you should go for the Moto G 3rd Gen.

Which handset among Motorola Moto G 3rd Gen vs Samsung Galaxy J5 do you think is better? Share your views with us in the comments section below!