Samsung has taken the wraps off its latest phablet Samsung Galaxy Note 5. The device will be rolled out for sale in the US and Canada starting August 21, 2015. Indian pricing and availability details, however have not been announced yet.

If you are planning to buy either of the two phablets and are confused about what improvements and upgrades does the Galaxy Note 5 brings with it over the predecessor, then in this post we have pitted the two against each other to ascertain which is better. Read on to find our how Samsung Galaxy Note 5 vs Galaxy Note 4 compare with each other. 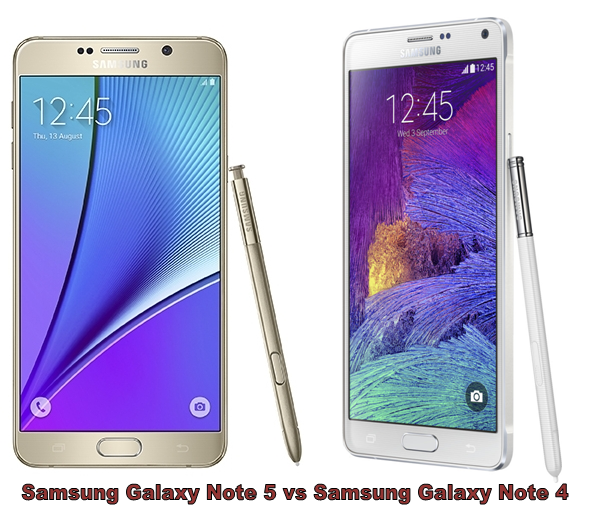 The Galaxy Note 5 comes with a curved back and metal frame. The device features S Pen with clickable button which is easier to pull out. Users can also write on the display of the phone even when the device is on standby mode. All other button placements on the device are same as the predecessor.

While Galaxy Note is powered by a quad-core Qualcomm Snapdragon 805 processor coupled with 3GB of RAM, the Note 5 comes with an octa-core Exynos 7422 processor paired with 4GB of RAM.

Both smartphones feature a 5.7 inch Super AMOLED display with 1440×2560 pixels resolution and Gorilla Glass 4 protection. Pixel density however has been bumped up to 518ppi on Galaxy Note 5 as opposed to 515ppi on Note 4.

Galaxy Note 4 houses 32GB of internal memory and supports microSD card for expandable storage up to 128GB. The Samsung Galaxy Note 5 comes in two variants based on storage- 32GB and 64GB and lacks microSD card support.

Although the Samsung Galaxy Note 5 comes without microSD card support and smaller battery than it predecessor, yet it excels in other departments with more RAM, improved rear camera and front camera and two storage variants. The Galaxy Note 5 does offer a number of upgrades and proves itself as an impressive phablet.

Which smartphone among Samsung Galaxy Note 5 vs Galaxy Note 4 do you think is better? Share your views with us in the comments section below!