Motorola is all set to launch a new smartphone with four rear cameras. The Motorola One Zoom will also come with an in-display fingerprint sensor, 48-megapixel primary sensor, and 5x hybrid zoom. Read more to find Motorola One Zoom Price in India, Specifications, and Features 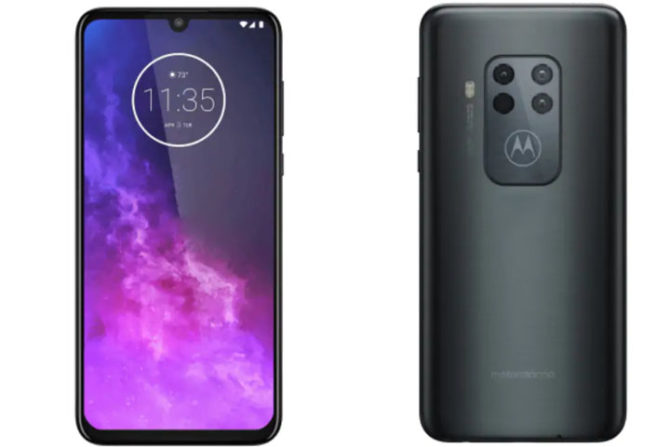 The Motorola One Zoom is expected to be launched after IFA 2019. It is rumored to be priced at EUR 429 (approx Rs 34,000). The new handset might be launched in certain markets as Motorola One Pro.

As per recent leaks and rumors, the upcoming handset will sport a quad-camera set up on the back (top-center). It is said to include a 48-megapixel primary sensor, a wide-angle sensor, a telephoto lens, and a depth sensor.

Users will get a bright and sharp image of 12-megapixel resolution (combines four pixels to improve brightness and color). The camera also comes with a 5x hybrid zoom feature.

Additionally, the Motorola One Zoom smartphone is tipped to sport a 6.2-inch Super AMOLED display with a Full-HD+ resolution, 21:9 aspect ratio, and a waterdrop-shaped notch. It will also feature an in-display fingerprint sensor.

The upcoming handset is said to come with a large battery. Connectivity options include a 3.5mm audio jack and a USB Type-C port. It will come pre-installed apps like Alexa, Amazon, etc.

Motorola is also working on a One Action smartphone. It will be powered by Samsung’s Exynos 9609 octa-core processor along with 4GB RAM and 128GB internal storage.

The upcoming handset is expected to come in Bluish-green, Gold, and White color options. It will feature a punch-hole design with narrow bezels. The  6.3-inch display will come with full-HD+ (1080 x 2520pixels) resolution and a 21:9 screen aspect ratio.

The Motorola One Action is likely to run Android 9.0 Pie operating system out-of-the-box (as part of the Android One Program). It will be backed by a 3500mAh battery.

The triple camera setup comes with a wide-angle lens (117-degree field of view) and a dual-tone LED flash. Additional features include a USB Type-C port, NFC, and a rear-mounted fingerprint scanner.

What do you think of the price and specs of the Motorola One Zoom smartphone? Share your views with us in the comments section below.