On 31st May 2018, Google India launched the beta version of their new Neighbourly app in the country. The app is one of a kind. Its function is to help people find local answers in their neighborhood. 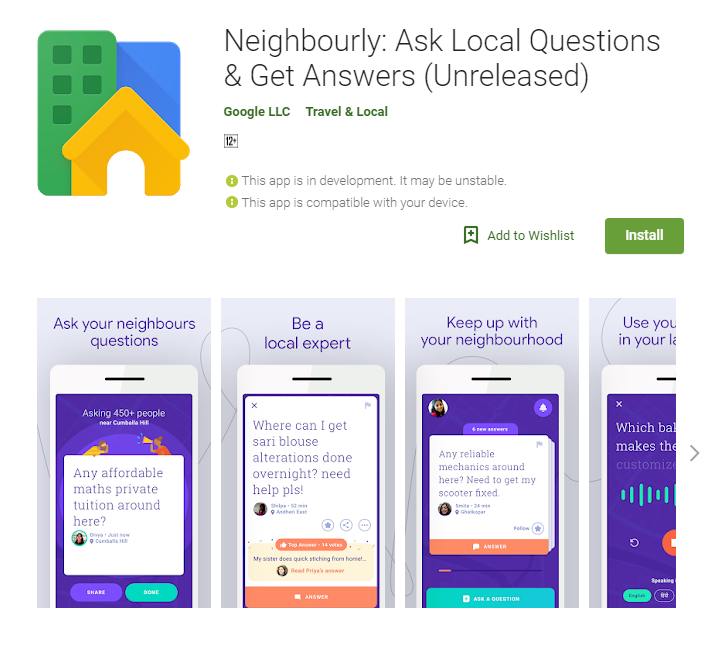 Google India tweeted, “The beta version is available today in Mumbai. If you’re in a different city, join the waitlist”.

The app can answer queries like affordable football schools near me.

The app’s description on its website states, “In big cities across India, it’s getting harder to get good answers to these questions because cities keep changing, including the people who live there.”

It further mentions, “That’s why we built ‘Neighbourly’, an app that helps you ask your neighbors’ questions, be a local expert, and keep up with your neighborhood”.

To use the Neighbourly app one needs to type or use their voice to answer neighbors’ questions. A user needs to swipe to stay in touch with everyone around them. Users can tap the star to follow matters and get updates due to answers. Users don’t need to share private details to ask and answer questions.

The website further notes, “With ‘Neighbourly’, your questions get routed to the right neighbors instantly, and then they can write back with the most up-to-date, relevant and accurate info”.

The tech giant has also released the stable version of its Chrome 67. It is being rolled out for Linux, Windows, and macOS. For desktop, the update is equipped with new features for AR and VR improvement. there is support for Generic Sensors API and other fixes.

The company has resolved 34 security fixes with Chrome 67. Strict isolation feature has been continued. By enabling Site Isolation, pages from different sites run in different processes with each process blocked from receiving particular types of sensitive data from other portals.

It included new Generic Sensors API which permits websites to access data from a device’s gyroscope, motion and accelerometer sensors. WebXR Device API is also included as developers can build AR and VR experiences for desktop-based and mobile-based VR headsets.

Article Name
Google India Launches Beta Version Of Its New Neighbourly App, Currently Exclusively In Mumbai Only
Description
On 31st May 2018, Google India launched the beta version of their new Neighbourly app in the country. The app is one of a kind. Its function is to help people find local answers in their neighborhood.
More related stories below: