HMD Global is working on a new camera-focused smartphone. The upcoming Nokia 10 is tipped to feature a penta-camera. Now, new design sketches have surfaced online which show the new camera setup. The multi-lens camera technology is detailed in a patent application by ZEISS. Read more to find about Nokia 10 Price in India, Specifications, and Features 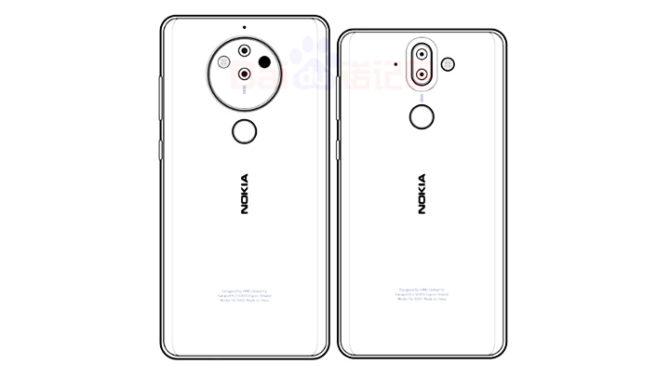 The Nokia 10 is said to be part of HMD Global’s 2018-lineup of smartphones. However, the company has not revealed any details about the launch date or price of the upcoming device.

According to recent leaks, the camera module on the Nokia 10 smartphone looks similar to a dual-lens camera with a primary lens at the centre. Additional lenses seem to be placed underneath the module. The rotatable module will allow users to change the focal length.

Zeiss is confirmed to be working on the multi-lens mobile camera technology. It has submitted a patent application with a German Patent and Trade Mark Office. The new technology uses an array of additional lenses with different focal lengths. The rotating lens base is placed between the camera sensor and a normal fixed-focal lens.

Additionally, the Nokia 10 is tipped to feature a fingerprint sensor on the back. As per the leaked image, the upcoming smartphone will come with a 3D glass back panel. It is said to feature an 18:9 display. The handset is likely to be powered by a Snapdragon 845 SoC.

HMD Global is set to launch multiple devices in the coming months. This includes Nokia 9, Nokia 4, and Nokia 8 (2018). A new leak has also revealed details of the Nokia 7 Plus. It is said to be powered by a Qualcomm Snapdragon 660 processor and 4GB RAM. It is tipped to run Android 8.0 Oreo operating system. The upcoming handset is likely to retain Carl Zeiss optics and ‘Dual-sight’ technology of Nokia 7.

The Nokia 7 sports a 5.2-inch LCD display with full HD resolution. It is powered by a Qualcomm Snapdragon 630 processor and 4GB/ 6GB RAM. The 64GB internal storage can be further expanded via a microSD card. The mid-range smartphone sports a 16-megapixel rear camera with f/1.8 aperture and a dual-tone flash. On the front, it features a 5-megapixel wide-angle front camera. It is backed by a 3,000 mAh battery.