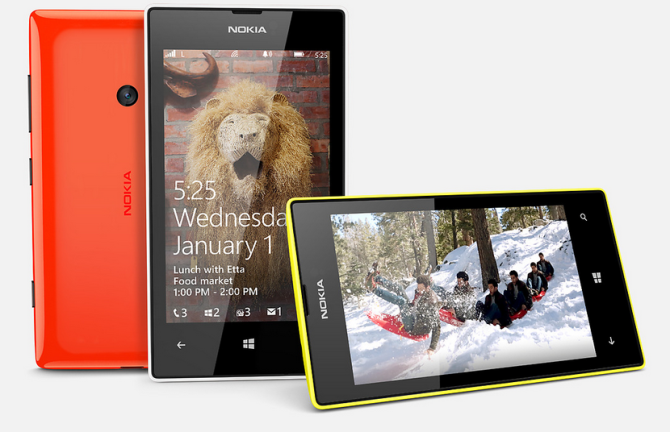 Best thing with this device is Nokia is not repeating its previous mistakes like low RAM. The previous Lumia devices have only 512MB that sometime not enough for users. So this time Nokia launched this type of budget phone with at least 1GB too. Although we think that a front facing camera still a big disappointment for some users.

Otherwise a 4 inch size design of this device is an eye candy . Design wise Nokia is known for making very good phones. The 235 ppi display is pretty good deal at this price tag. There is 5-megapixel autofocus camera without Flash.  Although it can capture up to 720p videos at 30 frame per second. The 1GHz Dual core snapdragon processor is coupled with 1GB RAM as we have mentioned earlier. The smartphone is running on latest windows operating system along with Lumia Black update for Lumia devices. There is 8GB internal memory which can be expand up to 64GB via a SD card.

The smartphone is powered by 1430 mAh battery which according to company gives maximum 17 hours of talk time. Connectivity wise it comes with latest Bluetooth 4.0, Wi-Fi. Like other Lumia devices Nokia is offering 7GB of cloud storage from SkyDrive.  It also come pre-installed with Nokia popular navigation apps like HERE Drive, HERE Maps, HERE Transit

So if you don’t like Android or you love the Windows tiles and other things, then this budget phone is a good deal at price around 10K. And also it will replace Nokia Lumia 520. Or may be Nokia will reduce the price of Nokia Lumia 520. So another affordable smartphone in market from Nokia. And we hope it will help Nokia to gain the more smartphone share in Market.