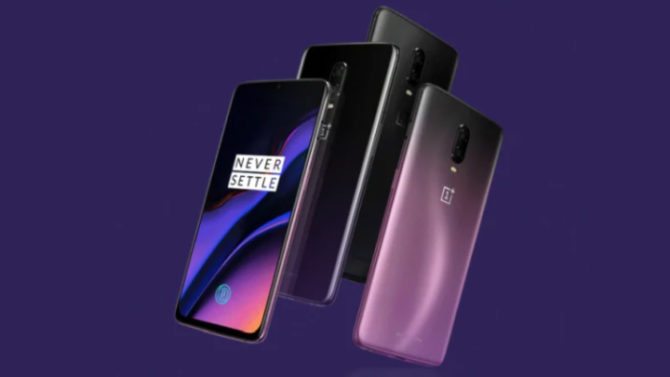 The OnePlus 6T Thunder Purple edition comes with 8GB RAM and 128GB storage. It is priced at Rs 41,999. The new variant will be available via OnePlus online store and Amazon India today. It can also be purchased from OnePlus offline stores and Croma, Reliance Digital outlets.

The new smartphone sports a 6.41-inch AMOLED display with full-HD+ (1080 x 2340pixels ) resolution, a 19.5:9 aspect ratio, sRGB (100.63 percent), DCI-P3 color gamuts, and a peak brightness of over 600 nits. The large display is protected by Corning Gorilla Glass 6. It features a waterdrop-style notch along with a three-in-one ambient light sensor, distance, and RGB sensor.

The OnePlus 6T is powered by an octa-core Qualcomm Snapdragon 845 processor and 6GB/ 8GB LPDDR4X RAM. The 128GB/ 256GB internal storage can be further expanded via a microSD card. The 3,700mAh battery comes with fast charging support that offers a full day of power in 30 minutes of charge.

Additionally, a new Nightscene feature allows you to capture brighter images in low-light situations with reduced noise. It uses a new HDR algorithm over a 2-second exposure and splices together up to 10 multi-frame shots. It will also be made available to the OnePlus 6 later this week.

The OnePlus 6T features an all-glass build. The new variant comes with a gradient back that fades from black to purple. An ‘S’ curve across the back highlights the depth of color. Connectivity options include 4G VoLTE, Wi-Fi 802ac (dual-band, 2.4GHz and 5GHz), Bluetooth v5.0, NFC, GPS/ A-GPS, and a USB Type-C (v2.0) port. The new handset ships with a USB Type-C to 3.5mm headphone jack adapter.

The dual-SIM smartphone runs Android 9.0 Pie operating system with OxygenOS on top. The in-display fingerprint sensor can unlock the smartphone in 0.34 seconds. It works with the OnePlus screen protector. The audio is enhanced with Dirac HD Sound and Dirac Power Sound support.

Additionally, the new handset comes with an improved Gaming Mode, and a Smart Boot feature (improves app cold-start speeds by 5 to 20 percent. However, it only works with gaming apps as of now). The company also announced that a feature that allows users to activate Google Assistant by long pressing the power button will soon be added.

OnePlus is expected to launch several more variants of the popular handset in the coming months. For its previous smartphone models, the Chinese manufacturer introduced color options like Lava Red, Sandstone White, and Silk White. What do you think of the new OnePlus 6T Thunder Purple option? Share your views with us in the comments section below