Oppo has launched a new budget smartphone in the Indian market. The new Oppo A3s comes with features like a dual rear camera setup, Full-Screen display, octa-core SoC and a massive battery. Let’s see how it compares to the other popular budget smartphones in the market. Read more to find about Oppo A3s vs Redmi Note 5 – Which Phone Is Better? 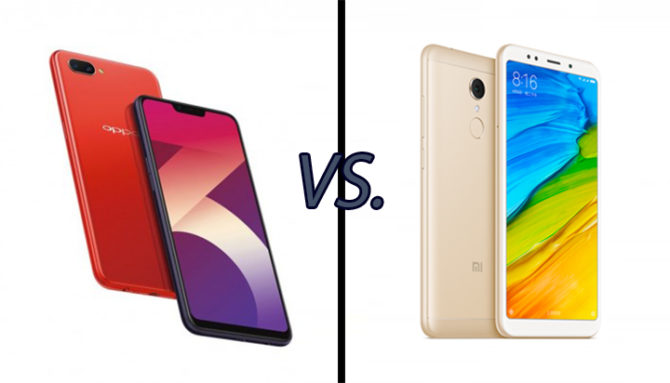 Also read: Honor 9 Lite VS Xiaomi Mi A1- Which Is Better And Why?

The Oppo A3s is powered by an octa-core Snapdragon 450 processor along with 2GB RAM and 16GB internal storage can be further expanded via a microSD card (up to 256GB).

On the other hand, the Redmi Note 5 is powered by an octa-core Snapdragon 625 processor along with 3GB/ 4GB of RAM and 32GB/ 64GB internal storage (expandable up to 128GB). Both smartphones feature a hybrid dual-SIM card slot.

While the Oppo handset is backed by a 4230mAh battery, the Xiaomi smartphone is powered by a 4000mAh battery.

In terms of optics, the Oppo A3s sports a dual rear camera setup which combines a 13-megapixel primary sensor with a 2-megapixel secondary sensor. Whereas the 8-megapixel front camera comes with AI Beauty Technology 2.0 features for beautification.

Meanwhile the Redmi Note 5 sports a single rear camera setup on the back (12-megapixel sensor). The 5-megapixel front camera comes with a selfie light and Beauty 4.0 beautification features.

Also read: Honor 7x VS Moto G5s Plus- Which Is Better And Why?

While there is no fingerprint sensor on Oppo A3s, it comes with the Face Unlock feature. While the Oppo A3s runs Android 8.1 Oreo operating system with ColorOS 5.1 on top, the Redmi Note 5 runs on MIUI 9.5 based on Android Nougat OS. Both handsets feature standard Connectivity options.

Also read: Honor 7X VS Xiaomi Mi A1- Which Is Better And Why?

While both devices bring some powerful specs, the Oppo handset comes with few additional features like AI-technology, Facial recognition, and dual rear camera setup. We will have to wait for tests in real-world situations for definitive results. Which of the two devices will you go for? Let us know in the comments section below.