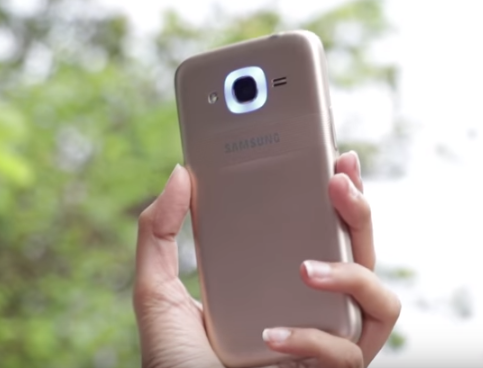 The Galaxy J2 2016 features a slightly different design compared to the predecessor. It looks similar to other J series phones from the front with plastic body, curved corners and chrome rim on the sides. But there are a lot of design tweaks that it brings with it. It gets a pattern on the edges and on the rear for better grip. It also comes with a Smart Glow ring on the rear that alerts users about battery, data usage and more. Despite featuring a plastic body, it doesn’t feel cheap. The build quality of the phone is good.

It features a Smart Glow ring on the rear that alerts users about battery, data usage and more. It also helps users in capturing selfies with the rear camera.

It comes with a rear cam selfie feature in the camera app in which the smart glow ring assists users in capturing selfies with the rear camera. The smart glow ring glows to provide you visual clues. It directs users to move the phone to the left or right so that your face is positioned properly to capture selfies. We tried this feature and we found it to be pretty accurate in positioning our face properly to get decent selfies.

It features Turbo Speed technology that optimizes the inbuilt apps of the phone to deliver smooth performance.

It comes with an S Bike mode that turns the phone into a bikers phone to avoid distraction. This feature avoids distraction of the bikers due to incoming calls and helps them to concentrate better on the road.

It comes with an Ultra Data Saving mode that compresses cellular data across all contents such as videos, photos, media, almost all apps and websites.

Compared to the predecessor, the Galaxy J2 2016 comes with a larger screen size and more screen resolution. It features a 5-inch HD sAMOLED display which is bright and vibrant. Viewing angles and sunlight legibility are also good.

It supports 4G connectivity with VoLTE.

It comes with dual SIM card slots and a separate microSD card slot with expandable support up to 128GB. It also supports USB OTG allowing users to watch videos and movies on the phone using pen-drive without transferring them.

The Galaxy J2 2016 sports an 8 mega pixel auto focus rear camera with LED flash and a 5 mega pixel front facing camera. Certainly the camera resolution of both front and rear cameras has been bumped up compared to the predecessor, yet it does not impress us much. The camera performance of the phone is average and be ready to expect some amount of graininess in the images.

It is powered by a 1.5GHz quad-core Spreadtrum SC7731 processor coupled with Mali-400 GPU and 1.5GB of RAM. On AnTuTu benchmarks, we got score of around 25,000 points. We played a few games on this device and found its gaming performance to be average as we faced lags and stutters while playing moderate to heavy games. It is not a performance oriented phone and we would not suggest this phone if you are a gaming freak but it is suitable for light users for general day to day usage.

It lacks auto brightness feature and requires users to adjust the brightness manually using the slider depending on the conditions. Samsung has however, provided an outdoor mode option that increases the brightness for 15 minutes or until the screen is turned off.

The sound quality from the speaker is just average. Audio is neither loud nor very clear and could have been better.

The Galaxy J2 2016 is priced at Rs. 9,750 which seems overpriced considering that there are some other options in the same price range that offer better specs.

The Galaxy J2 2016 comes with a lot of upgrades and improvements over its predecessor. It comes with numerous useful features like Ultra data saving mode, sAMOLED display, VoLTE support, Smart Glow Ring, Turbo Speed technology and Rear-cam selfie. It does have a few downsides such as lack of auto brightness feature and is not a performance oriented phone. Yet, it impresses us with the plethora of interesting features that it offers.