It has surfaced online that South Korean tech giant Samsung will be working on an Android Go Edition smartphone. It is being speculated that the smartphone will be called the Samsung Galaxy J2 Core. The model number of the device is Samsung SM-J260G. Recently, a Samsung smartphone appeared on benchmarking platform Geekbench. Samsung hasn’t officially revealed any information about the model, not have they verified the Geekbench report. The Geekbench listing leaked out several specifications of the device. 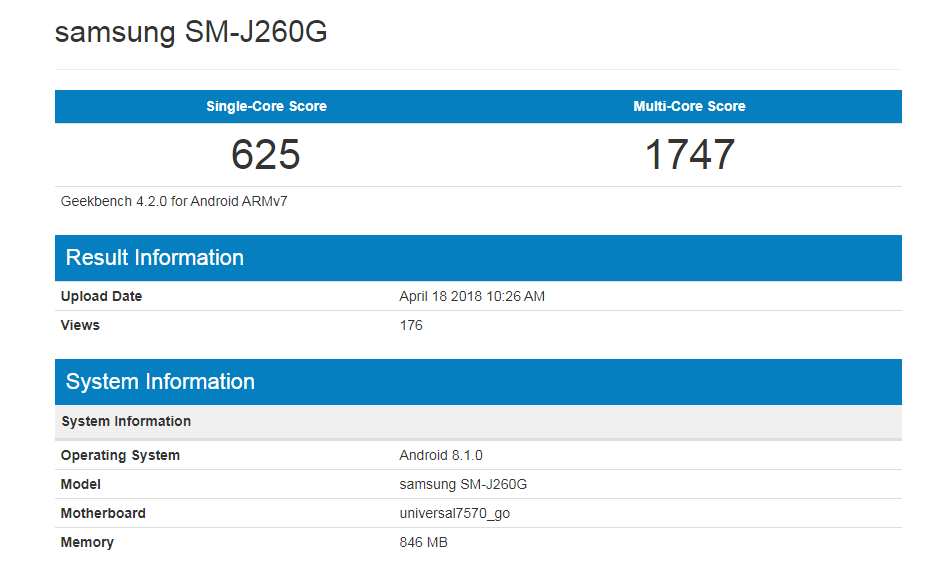 The Samsung SM-J260G or Samsung Galaxy J2 Core will allegedly come with entry-level hardware; just like other Android Go devices. The listing reveals that the smartphone will use the Universal7570 Go chipset. It is probably a compatible version of Samsung’s Exynos 7570 chipset. The chipset will be equipped with four ARM Cortex A53 cores clocked at 1.43GHz. It will be backed by 1GB RAM.

When the benchmark was being run, the smartphone was running Android Oreo 8.1.0. This further proves the fact that it will be an Android Go Edition smartphone.

Recently details regarding the Samsung Galaxy S9 Active also got leaked. According to the leak, the smartphone would launch during 2018’s second half. It also revealed that the smartphone would be powered by octa-core Qualcomm Snapdragon 845 SoC, paired with 4GB RAM and 64GB inbuilt storage. It also revealed that the display would be a  screen size of 5.8-inch and QHD+ resolution of 1,440×2,960 pixels. The back side of the phone would sport a 12-megapixel sensor with f/1.5 – f/2.4 dual aperture. The front camera would be equipped with an 8-megapixel sensor with f/1.7 aperture. According to the leak, the smartphone is also expected to be built with a 4,000mAh battery pack.

Also recently the renders of the Samsung Galaxy A6 and Galaxy A6 Plus also got leaked. The leaked renders showed that the devices would come with a physical home button. They would also be built with the InfinityDisplay and a fingerprint scanner below the camera. It also speculated that the A6 Plus would sport a dual-camera at the back, unlike the Galaxy A6. The smartphones would also sport a 3.5mm headphone jack. The leak also states that the Galaxy A6 duo will be built with Exynos 7870 SoC, coupled with 3GB/4GB RAM.

Article Name
Alleged Samsung Galaxy J2 Core Surfaces In Benchmarking Site Geekbench
Description
It has surfaced online that South Korean tech giant Samsung will be working on an Android Go Edition smartphone. It is being speculated that the smartphone will be called the Samsung Galaxy J2 Core. The model number of the device is Samsung SM-J260G.
More related stories below: