Apple has launched its much-anticipated flagship handset, called iPhone X. It comes with features like bezel-less design, Face ID, TrueTone OLED display and wireless charging. Can the new handset compete with powerful and innovative offerings by rival brands? Let’s do a quick comparison and find how the new iPhone compares with the latest Samsung flagship. Read more to find about Samsung Galaxy Note 8 Vs iPhone X Comparison- Which Phone Is Better? 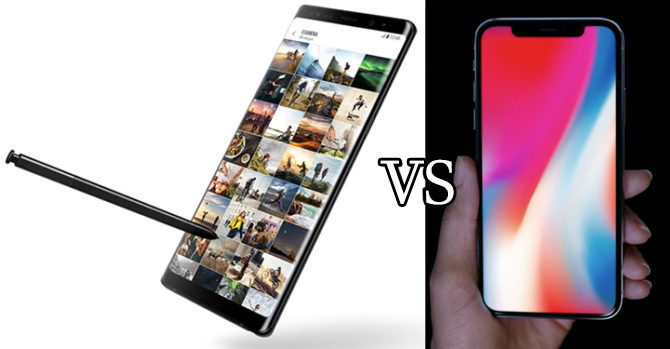 The Apple iPhone X (256GB) is priced at Rs 1,02,000 in India, which makes it the most expensive smartphone in the country. The 64GB model will be available in India at Rs 89,000 (64GB variant) from November 3. On the other hand, Samsung Galaxy Note 8 is priced in India at Rs 67,900. It will be available from September 21. The Samsung handset has an advantage in this segment.

Also read: Samsung Galaxy Note 8 Vs iPhone 8 Plus – Which Phone Is Better?

The Apple iPhone X is powered by a Hexa-core A11 Bionic processor which is being touted by Apple as ‘the smartest chip ever in a smartphone’. Apple claims that the new chipset is up to 70 percent faster than the A10 chipset on last year’s iPhone models. The new processor is also supported by a 30 percent faster GPU.

Whereas the Samsung Galaxy Note 8 is powered by an octa-core Exynos 8895 processor along with 6GB RAM and 64GB internal storage (expandable). It is backed by a 3,330mAh battery.

Both handsets feature a dual camera setup on the back. The Apple iPhone X features two 12-megapixel cameras with f/1.8 and f/2.4 apertures. Camera features include Optical Image Stabilizations (OIS), quad-LED True Tone flash, Portrait Mode (allows you to take images with depth of field effects) and Portrait Lighting (allows you to select the lighting effect from different options). On the front, the new iPhone X features a 7-megapixel TrueDepth camera with Portrait Mode and Portrait Lighting features.

Apart from standard options, the Samsung Galaxy Note 8 sports the S-Pen feature which comes with a full set of customizable Edge Panels and Air Commands with S-Pen functionality. Other features include Bixby AI assistant (with a dedicated Bixby button), Infinity Display, and IP68-certification (dust and water resistance).

On the other hand, the new Apple iPhone X supports wireless charging via Qi wireless charging standard. A 3D face recognition feature called Face ID uses Apple’s TrueDepth camera system to detect your face. It is powered by an A11 Neural Bionic Engine with a dual-core design which can perform 600 billion operations in a second. Additional features include a Flood Illuminator, customisable animated emojis called Animojis, and ‘Tap to wake’.

The Galaxy Note 8 sports a near bezel-less display with an aspect ratio of 18.5:9. The 6.3-inch super AMOLED display comes with QHD+ resolution. The Galaxy Note 8 is slightly larger at 162.5 x 74.8 x 8.6mm. It weighs 195g. The latest Samsung flagship handset looks as sleek and modern as the new iPhone X, if not more.

Both the Galaxy Note 8 and the iPhone X offer the best of Android and iOS platforms, respectively. While the Apple flagship comes with several cool features and re-design, the Galaxy Note 8 looks more attractive in terms of price. We will have to wait for tests in real-world scenarios to get a complete picture. Which of the two premium handsets will you go for? Let us know in the comments section below.