Samsung is gearing up for the launch of Samsung Galaxy S6 Mini smartphone. The device ahead of its official launch, has been spotted listed by a UAE-based online retailer LetsTango revealing its specifications, features as well as images. The listing was first spotted by GSMArena and has now been taken down. As per the listing, the Galaxy S6 Mini is powered by a 1.8GHz hexa-core processor paired with 2GB of RAM. Running Android 5.1 Lollipop operating system, it features a 4.6-inch Super AMOLED display. For storage purpose, it comes with 16GB of internal memory. In camera department, the handset flaunts a 15 mega pixel rear camera and a 5 mega pixel front facing camera.

The listing also revealed that the phone features PayPal certified fingerprint sensor integrated into home button for additional security. Rest of the specifications such as battery capacity and connectivity options were not mentioned in the listing. 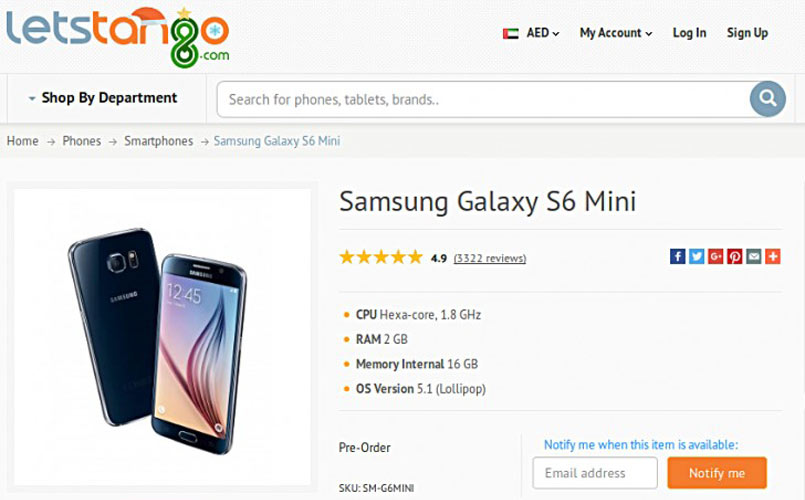 There is no word on pricing and availability details of the Samsung Galaxy S6 Mini. We expect Samsung to make the device official in the coming days.

Samsung is also said to be working on its next flagship smartphone, dubbed the Samsung Galaxy S7. You can check rumored specifications and features of the device here.