You know Samsung. This company needs no introduction. You may be using one of its products at your home right now.  When talking about smartphones, Samsung is a powerhouse. You know it for its Galaxy S range of smartphones and Galaxy Note range of phablets. Not too long ago, it made a great performer though not a great looker called Galaxy S5. Since then, Samsung has refined its game a lot, starting with the Galaxy S6. The Galaxy S7 is a Galaxy S6 with incremental changes that makes it worth buying. The Galaxy S8, however, is a different smartphone altogether. It seeks to redefine what a smartphone is all about. Just how much? Read our Samsung Galaxy S8 India review to find out. 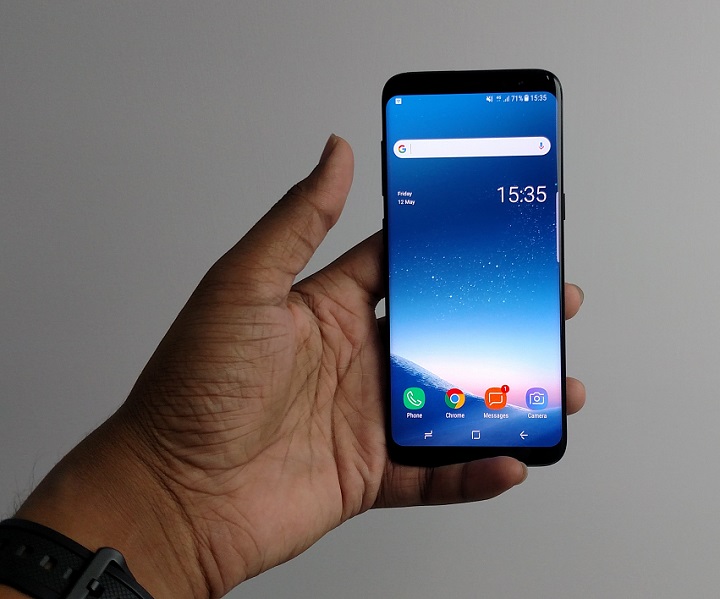 You can just keep looking at the screen for hours at end.

Why I start with the Galaxy S8’s dimensions is because they are unique. Instead of going for regular dimensions, Samsung opted for a phone which is taller than usual. As a result, the width of the phone has come down. While this makes the phone look awkward, it helps it in the ergonomics department. After all, reaching from one end to another on this phone is easier than on any other smartphone, save for LG G6 which has similar dimensions. Lest we forget, it is partly because of its dimensions that this phone looks so good. It feels such a handy size to hold and use, however, the use of glass can be questioned. 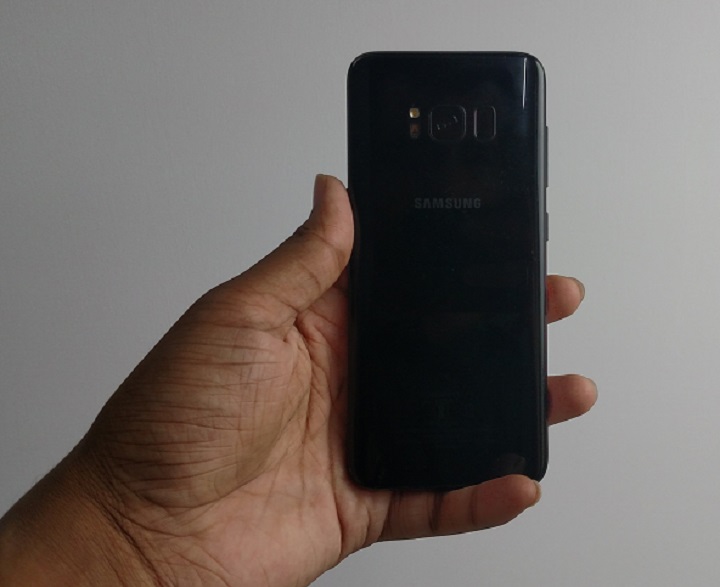 Thre is the ‘ergonomic nightmare’ that is the fingerprint scanner next to the camera, on the right.

This phone is not delicate as numerous tests by other outlets have shown. However, when you hold and use it, you can’t shake the feeling that this phone cannot survive a drop without suffering more than just a scratch or two. Yes, it is a flagship and you should not drop it even accidentally. But it won’t help you if all you have to worry about is not to drop it, a feeling this phone can induce into you easily. This surely is the best smartphone design of the year till date but one that has to be ruined by using of a case/cover or by accidental damage.

The Samsung Galaxy S8’s Infinity Screen is radical. We know that Samsung makes the best smartphone screens. The Super AMOLED displays are just great. When you curive them to the sides, like on the Galaxy S7, they become immersive. The Galaxy S8 makes the screen such a big part of the phone that now it redefines what a display is and what it needs to be. With Quad HD resolution and dual-curved sides, the Samsung Super AMOLED panels felt over the top. The Infinity Screen? It is so over the top that it feels fantabulous. 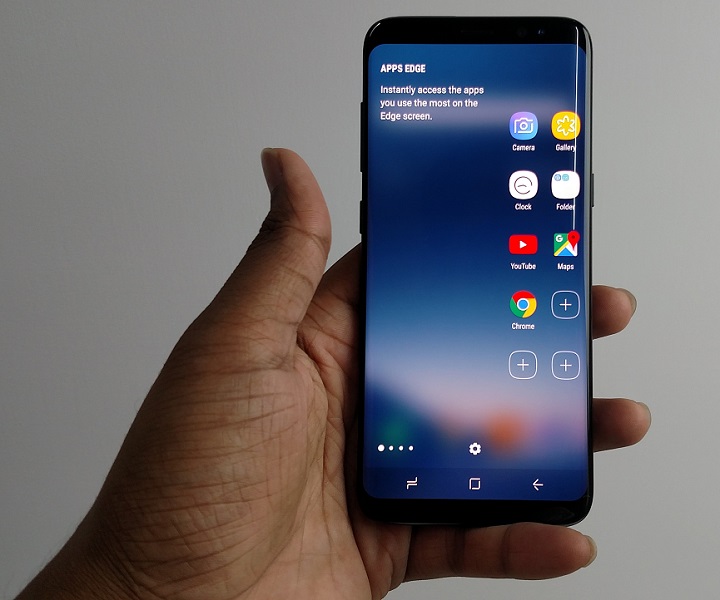 Edge screen add-ons are fun to play with

I have always preferred AMOLED displays to LCDs. They can get extremely bright, are more visible under sunlight and feel so much nicer to look at than LCDs. But nothing compares to Samsung’s panels. However, do note that Galaxy S8’s screen’s aspect ratio is something you will have to get used to. The phone has become narrower than its predecessor and that’s not necessarily a good thing. Now, if you watch a movie in landscape mode, it most likely will have black bars on either side. You can blame it on the aspect ratio. However, for those who do a lot of reading, this screen is great. There is more text to read through without scrolling and messaging becomes easier too, as a result.

If media consumption is your primary criteria, there is not better display than that of Galaxy S8 in the market. Brilliant job, Samsung!

Usually, this is the department where I get to complain. My rant continues in the Samsung Galaxy S8 India review. After all, like last year, Samsung brings its flagship phone to India but forgets to bring the fastest processor available. Make no mistake, the Exynos 8895 is a great chip. The same 10nm process which Samsung used to make Qualcomm Snapdragon 835 chip has been used to make this too. So, while I may complain, I do not doubt the Exynos chip’s power. 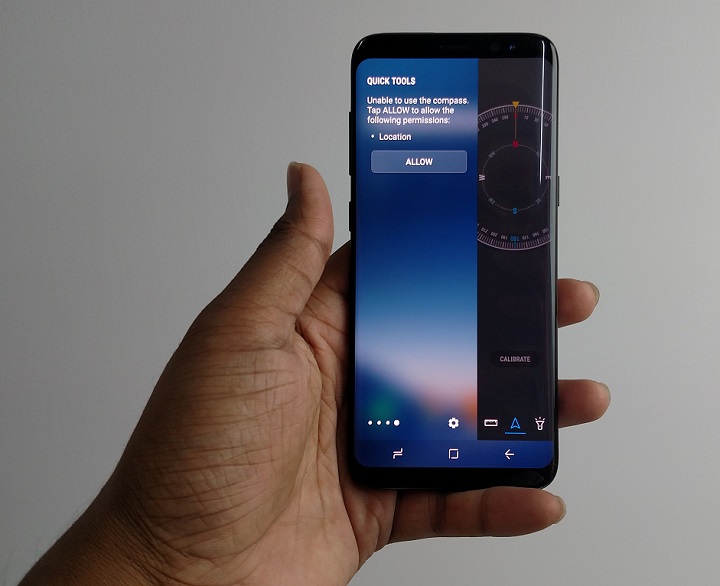 As far as RAM goes, 4GB is not an eyebrow-raising number. After all, OnePlus 3T has 6GB RAM. However, to handle the tasks thrown at it, the Galaxy S8 does not need any more RAM than what it has. With 64GB internal storage on board, you may think it is not enough. However, a microSD card may just suffice your needs. The Galaxy S8 can accommodate it and this makes it somewhat unique in this segment. Why? More companies are switching to Apple-style storage-based variants. At least by not going that way, Samsung does not have to brainstorm for days about the Galaxy S8’s price.

Please do not ask me for benchmark numbers. They have no use here. A flagship phone is the cream of the crop from its maker. If it cannot handle power usage with ease, it is not a flagship. Simple as that. Also, if Samsung is making the Snapdragon 835 chip, don’t you think it will make an equally or more powerful Exynos chip?

I won’t bore you with this section here. Instead, there is already a camera comparison between the Galaxy S8 and LG G6 running our website. If you wish to know how this camera performs (you will need perspective too), here’s the link to that comparison.

The Samsung Galaxy S8 is filled to the brim with features. Let’s start with the OS first. There is the latest Android 7.0 Nougat on the Galaxy S8. The TouchWiz UI skin sits atop it. While I am not a fan of skinning Android OS, this time around, I can make peace with it. Due to this skin, the Home, Return and Multitasking buttons on the Galaxy S8 get a new look. I am all for it. A trouble spot here is the presence of redundant apps. If I have Google Music, why do I need another music app from Samsung? Also, to call up the app drawer, you have to swipe up and down on the home screen. However, it can confuse new users who have not spent a few minutes playing with this device before.

A quick note on fingerprint scanner. While its placement is quite wrong, I never faced any difficulty in using it. Yes, initial few times (5-6, to be exact) I had my finger on the camera when using the fingerprint reader. After that though, I never smudged the camera again. Perks of having a phone that has less width than a traditional device. Swipe up or down the home screen to call up the app drawer. This is one neat animation showcasing the chip’s prowess.

Another feature worth talking about in this Samsung Galaxy S8 India review is Bixby. Bixby is Samsung’s own virtual assistant. However, unlike Google Assistant, it works on local level. This means it is not capable right now to go on internet and search for something, if you ask it to. As a work in progress, I can handle it. However, for now, it is just causing redundancy. After all, in the presence of Google Assistant, why will I use Bixby?

I have been a fan of Samsung Galaxy S phones’ battery life and nothing changes with the Galaxy S8. With my usage, I can actually make the battery last for almost three days on a single full charge. Why? If I have to write pieces such as these for you daily, I am not left with much time to do anything else. Calling, messaging, checking mails, listening to music, a little bit of gaming and watching videos is how I use my phone in free time.

Initially, I struggled in getting good battery life out of this phone. Then I turned off its Always On display feature and there was more battery life (Motorola does the Always On display bit the best. Period). However, I like to charge my phone as fewer times as possible. So, I began my hunt for power-sapping features and began turning them off. This way, I stumbled upon its display resolution feature. The way I got the device, it was set on FHD+. I turned it up to QHD+ and left it there. Some time later, when the phone had understood my usage, it started asking me to kill background apps to save battery.

USB Type-C port for plugging in the charger

Ever the battery miser, I keep killing apps to preserve battery life and RAM. Hence, this feature became my biggest reason to go for this phone. Now, only if Samsung could work on simplifying the Settings screen. It just confuses me to no end sometimes. Note to other smartphone makers here – implement Settings suggestions just like Samsung did with Galaxy S8. Makes for easy living as using those suggestions, you can jump from one screen to anther with as little inputs as possible.

I am going on record to say this phone isn’t perfect. I have made my issues clear with this phone and mentioned only those that were worth mentioning. What I felt during the Samsung Galaxy S8 India review is the fact that its design is its selling point. Also, if everyone is going to still slap on a case on this phone, why make it as sturdy as the Moto Z Force? Let it be the way it is, even if that does not give its owner any confidence of using it as a daily driver. If there is one thing I can say with surety, it is that Samsung understands users. There are just a handful folks who will not like this phone’s design, display performance or battery life. I thought I could be one of them. In the end, I am not. 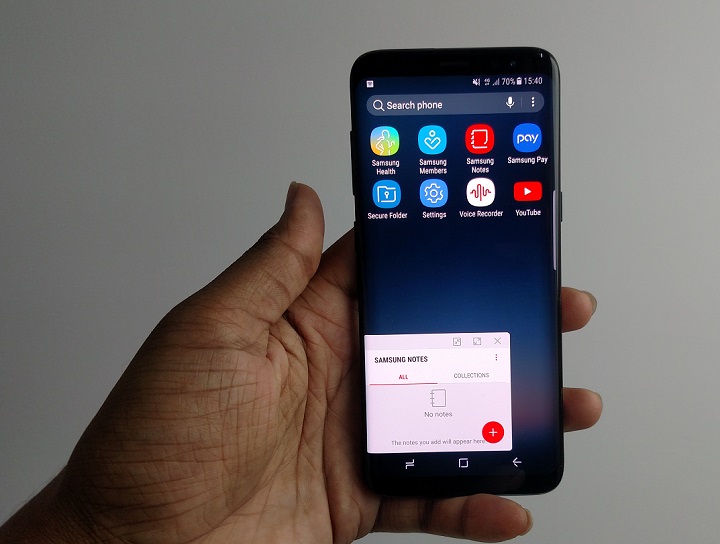 Lesson learnt – Just because it feels delicate does not mean it is a bad phone. During the Samsung Galaxy S8 India review, I adapted myself to using this smartphone on a daily basis.This means keeping it in clear view, walking far from walls and doors, etc. This helped me in reducing the damage I accidentally caused to my personal phone as well. For that, I thank Samsung for making this phone. Also, I recommend the making of such phones as this will definitely reduce the incidents of folks dropping their phones even by accident.

I use my current phone without a case or even a screen cover. If despite my carefulness, my habits can change, then it will change how people handle their phones in general. So the Galaxy S8’s impact on buyers in general is quite huge. This is why I give it my thumbs up.