Google has released multiple apps and features for Indian users. One of the new additions is a ‘Two-Wheeler’ mode in Google Maps. The new feature was announced by the search engine giant at its ‘Google for India’ event. It can be found in the latest version of the Android app. Read more to find about How To Use Two-Wheeler Mode In Google Maps 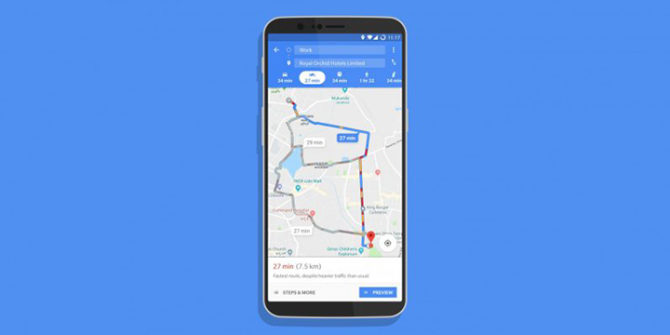 A new ‘Two-Wheeler’ Mode has been added to the Google Maps for Indian users. It will help bikers to find the fastest ‘bike-compatible’ route to their destination. As of now, the new feature is only showing in the latest version of the Android app.

How To Use Two-Wheeler Mode In Google Maps

The new ‘Two-wheeler’ is placed alongside the earlier alternatives of Car, Foot, and Train. It offers customized routing and voice-guided navigation along with enhanced landmark navigation. Once this mode is selected, you will get information about all possible road closures along the way. The fairly intuitive mode also provides the parking information at your destination (similar to the car mode).

Google is using machine learning to accurately predict speed and routes for two-wheeled vehicles. With the new special mode, riders won’t have to mix the walking and driving directions to find a good route. The new feature comes in the latest Google Maps v9.67.1 for Android.

India is the first market to get Motorcycle mode. The ‘India-first feature’ will help the bikers in the country find most suitable routes for their vehicles. A substantial chunk of the Indian users travels on motorbikes. The new feature will help them find faster routes that are not wide enough for bigger vehicles and were hidden earlier. Currently, India is the largest two-wheeler market in the world. Over 70 percent of all registered vehicles in the country are two-wheelers. Google Maps has seen a 2x user growth in India in the past year. The new feature will further boost the popularity of the app. However, we will have to wait and see how the users adopt the new feature.

Google also announced a suite of new features and apps for Indian users. The search engine giant also announced Android Oreo Go edition for low-end phones (with less than 1GB RAM). It is essentially a polished version of Search Lite that offers basic Google Search with a simple interface. The Files Go app helps Android users to free up space, find files quickly, and share files offline. Recently, the company announced Google Datally app that helps users to monitor, control, and save mobile data consumption. With the new apps and features, Google is targeting more than 400 million Indian internet users. The company aims to increase its reach in the Asian region. The India-first apps will help the company to build better products for everyone.