The Chinese smartphone maker has already released an official teaser trailer on its Weibo account. It reveals a similar kind of emoji as seen on Apple’s Animoji.

The teaser shows characters like a pig and Xiaomoi’s official mascot singing the company’s flagship tune.

The teaser ends with a countdown to the scheduled launch day.

The Xiaomi Mi 8 leak reveals the smartphone’s retail box. It also reveals the handset’s specifications. Moreover, Qualcomm has already mentioned that the smartphone will be compatible with the latest Quick Charge 4.0+ fast charging standard.

In a tweet, Xiaomi Global Spokesperson Donovan Sung has already revealed the use of Qualcomm’s top-end mobile SoC, “We’re excited to announce that #Mi8 will use the Snapdragon 845 processor! This is a true flagship processor, suitable for a true flagship phone. More details on May 31!”

In the Xiaomi Mi 8 leak, the black retail box has a big 8 placed in the front. The back doesn’t have much print other than some specifications. 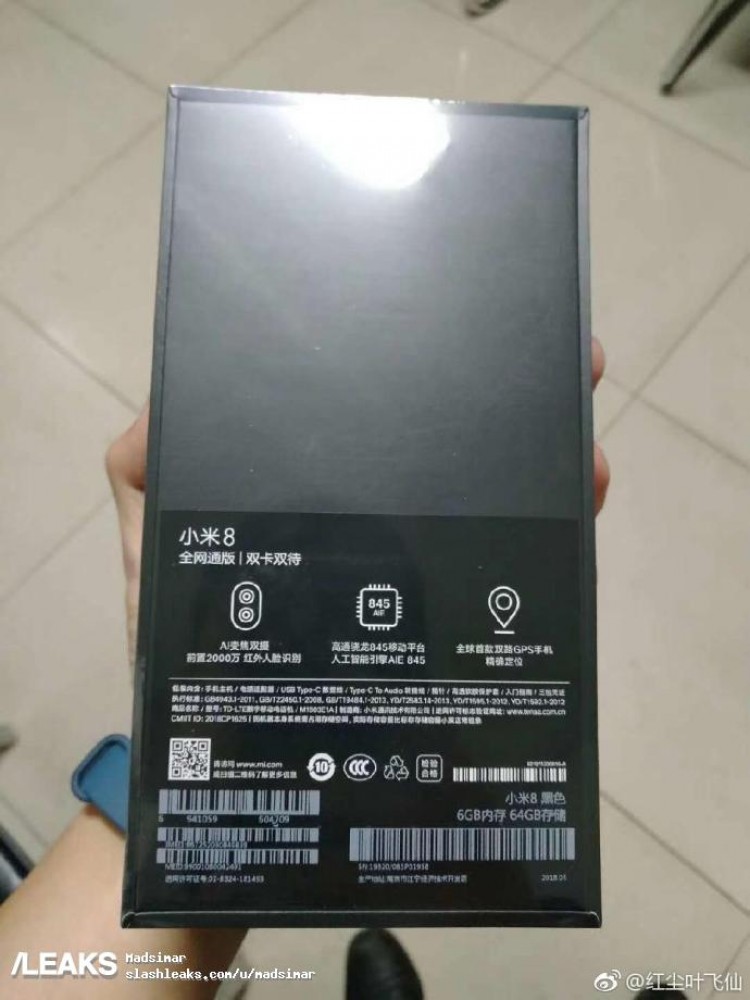 The Mi 8 will be powered by Snapdragon 845 processor packed with 6GB RAM. The handset’s internal storage is 64GB. The handset also supports dual-GPS mode.

The smartphone also has a poster leak on SlashLeaks. The Mi 8 is seen with a notch display, dual camera setup. The poster also states the already revealed information in the retail box. It further claims that it will come with 3D infrared facial recognition.

According to Mydrivers, Qualcomm has already updated its official page, to show that Mi 8 is one of its supported devices. The latest Qualcomm tech claims to charge 50 percent of the smartphone in 15 minutes.

The Mi 8 smartphone will launch on 31st May 2018. It is speculated to come with an under-display fingerprint scanner. It will also come in different RAM/storage variants. The smartphone will most probably be equipped with a 6.2-inch full-HD (1080×2280 pixels) display. It will also have a 19:9 aspect ratio. The dual rear camera setup will come with a 20-megapixel primary sensor, featuring a f/1.7 aperture, and a 16-megapixel secondary sensor along with a f/2.0 aperture. On the front, a 16-megapixel camera sensor along with a f/2.0 aperture is expected. The smartphone also seems to have 6GB of RAM and 128GB of onboard storage.

Article Name
Xiaomi Mi 8 Leak Appears Online, Teases Apple's Animoji-Like Emojis
Description
Flagship smartphone Mi 8 will be released on 31st may 2018 in China. According to a Xiaomi Mi 8 leak in Weibo, the handset will have 3D AR emojis just like Animoji on the iPhone X. The company has already confirmed that the handset will be powered by Qualcomm's Snapdragon 845 SoC. A Xiaomi Mi 8 leak had surfaced online earlier by SlashLeaks.
More related stories below: