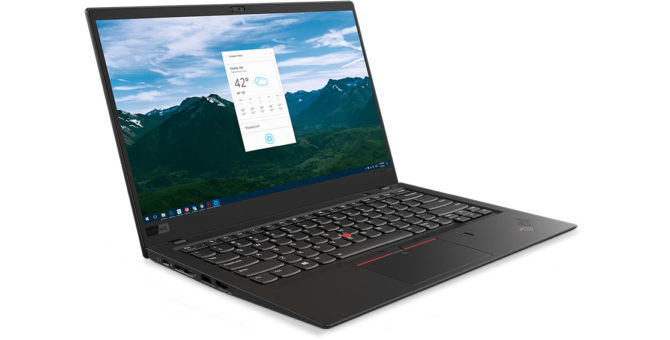 Commenting on the launch, Rohit Midha, Director of Lenovo India’s Commercial Named Account said, “The digital transformation has catapulted businesses to transform their workforce. The latest Think portfolio is in line with the changes that new technologies have brought about. With the new Intel® processor coupled with the legendary attributes of our Think product, the latest thin and light range is well equipped for the mobile workforce of today and tomorrow.”

The latest Lenovo ThinkPad Portfolio is in line with the changes that new technologies. The changes have been due to the new Intel processor, which the company is using.

The newly released ThinkPad X1 Carbon (Starting from INR 1,21,000) and X1 Yoga (Starting from INR 1,26,000) are the world’s first laptops to support Dolby Vision HDR and an exceptionally bright display supporting up to 500 NITS peak brightness. The camera-covering sticky notes have been replaced with a ThinkShutter Camera Privacy physical webcam cover. The devices are also equipped with IR camera for glance eye tracking for productivity and security.

The Lenovo ThinkPad X280 has been priced from Rs 73,000 and X380 Yoga starts from Rs 87,000. Both will be available from this month, April 2018. The laptops have been Mil-Spec tested for durability. The ThinkPad X series can work in some of the world’s most inhospitable places.

The laptops are equipped with Rapid Charge, which delivers 80 percent battery in 60 minutes, with the X280 offering up to 16.6 hours and X380 Yoga offering up to 13.6 hours of battery life.

The X280 is also 20 percent lighter (2.5 pounds) and 15 percent thinner (17.4mm) compared to its predecessor. Meanwhile, the Active Pen and secure access have been made easy with the IR camera and Windows Hello in X380 Yoga – to enhance end-user experience.

The laptops have been built with class-leading security with IR camera, fingerprint reader and ThinkShutter Camera Privacy to protect valuable user data. In terms of graphics, the ThinkPad T580 displays up to UHD – which is premium.

In the battery management department, the laptops have been given extended battery options for enhanced longevity delivering up to 27 hours. the ThinkPad T480s weighs just 2.9 pounds making them one of the lightest business laptops. The series has even been given the “Corporate Workhorse” name.

In terms of design, they are built with new 13-inch form factors and are redesigned thinner and lighter. The devices are equipped with optional multi-touch displays, complete docking solutions, and powerful 8th Gen Intel Core processors. All these features offer great performance and exceptional value to this series.

The ThinkPad L580 is equipped with new discrete AMD graphics.

This might just be the Asian’s company’s year and the Lenovo ThinkPad Portfolio can be a big hit. The specifications and features also lead to a powerful ThinkPad experience. So get ready for this bonanza by Lenovo – who don’t seem to disappoint this time.