Based on recent reports, it has been revealed that the Jeff Bezos-founded company is working on something big– Amazon home robot. The company has already established itself through its e-commerce outlet, Kindle, Echo etc. 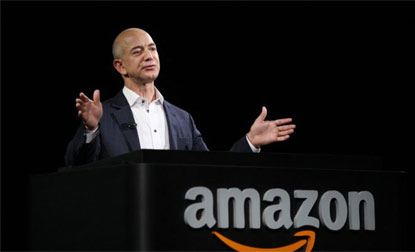 The Seattle-based company is allegedly planning on making an Amazon home robot. The project has been codenamed “Vesta” and is being managed by Gregg Zehr. Zehr manages the company’s Lab126 hardware research and development division in California. It is responsible for many Amazon devices.

The project was thought off, a few years back. It is being reported that Amazon is working on the project, and have hired concerned people with listings.

Amazon hasn’t officially announced anything regarding the Amazon home robot.

Bloomberg has reported that people familiar with the project say that the Amazon home robot could be a mobile Alexa, attending customers in areas of their home where Echo is not there. Allegedly prototypes of the Amazon home robot have advanced cameras and computer vision software. It can go through homes like a car. The company has allegedly hired specialized engineers from the robotics sector.

This project is going to be different than the robots designed by a company subsidiary, Amazon Robotics.

Attempts By Other Companies

Robotics has always promised us all, but then upon release, it hasn’t received much fanfare and approvals. In 1983, Atari founder Nolan Bushnell introduced the Topo Robot. It could be moved around by an Apple II computer. It was sold less, and hardly made profits. Many companies have tried to develop their robotics sector but have had rare success. iRobot’s Roomba which vacuums is the only victor. It has sold more than 20 million units since 2002. But now the company is in decline.

Sony and LG have recently displayed interest in robotics. Recently LG showed off a robot called Cloi. Moreover, the demonstration failed multiple times. Sony had a sold version of its recently revealed robotic dog, earlier. The robot is expensive and just barks.

Advances in computers, technology, AI, voice activation has made it easier for Amazon to bring its robot to the world market. The company has already proved its mettle with its various plans, products, and services. Moreover, this move by Amazon is a big bet. It could very well be their match point in the robotics sector.

Article Name
Amazon Home Robot: Jeff Bezos-Founded Company Working On Another Big Bet
Description
Based on recent reports, it has been revealed that the Jeff Bezos-founded company is working on something big– Amazon home robot. The company has already established itself through its e-commerce outlet, Kindle, Echo etc.
More related stories below: