American rivals Amazon and Best Buy have tied-up to sell smart television sets built on Amazon’s very own Fire TV operating system. The partnership was announced on 18th April 2018 via an official blog post by Amazon. Amazon has revealed that they will launch more than 10 Fire TV Edition models (from Toshiba and Insignia) this year. The televisions will be available exclusively through Best Buy’s own store, Amazon’s store and its retail outlets. 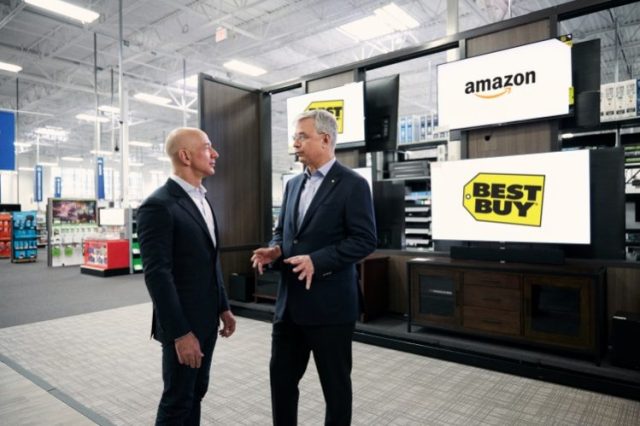 This has become the latest development in the war for consumers’ needs in their homes. Google has already entered the game with their very own Android TV, assisted by its voice-activated Google Assistant.

The e-commerce giant had launched its first TV (built on Fire TV OS) in 2017, via a tie-up with Element. But their latest partnership with their rival has increased their base and fanfare, as the television sets will be placed around everywhere in one of the biggest retail stores in North America, Best Buy.

Amazon Ceo Jeff Bezos has stated that this will take their partnership to a different stage as they have already together earlier. According to Bezos, these smart televisions will provide terrific visuals due to its immaculate display assisted with Alexa.

The first product of this tie-up will be a Fire TV Edition Toshiba smart TV. It will be launched by Best Buy this year, with more models also coming up after it this year. Even Canadian customers will be able to buy it.

Amazon already sells a lot of Fire TV sticks and boxes. These devices can be incorporated into any television with the integration of the Fire TV OS.

Fire TV operating system can already incorporate with other over-the-air broadcasts and devices, connected through the HDMI port of a television (like a PlayStation). Through Alexa, a user can carry out voice searches for content. The content includes live broadcast or streaming services like Prime Video and Netflix.

This partnership will give Amazon a better stand in the smart television market, regarding connecting the device with appliances like video doorbells etc.

According to a statement by Amazon, this new partnership is a “multi-year, exclusive partnership.”