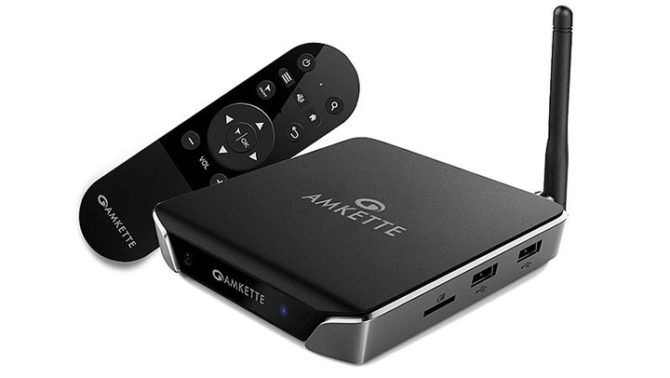 The Amkette Evo TV 3 4K is now available in India at Rs 7,999. The company launched the Evo TV 2 4K in December last year.

The new upgrades on the Amkette Evo TV 3 4K include 2GB RAM. It is powered by a 1.6GHz 64-bit ARM Cortex-A53 octa-core processor and an ARM Mali 450 Penta-core GPU. The 8GB internal storage can be expanded with a Class 10 microSD card (up to 128GB).

The new Evo TV model supports 7.1 channel Dolby Digital surround sound. Connectivity options include an enhanced Wi-Fi 802.11 g/n. You can also connect the new Evo TV with your compatible headphones via Bluetooth 4.1. It also comes with support for Evo Gamepad (to connect to your HDTV). Additionally, the new device comes with a six-axis gyroscopic ‘air’ remote.

The media streaming device runs Android Marshmallow 6.0.1 operating system. The preloaded media player app is compatible with the latest H.265 and VP9 formats. The open source Kodi media organizer and player allow you to stream your photos, videos and music directly from your smartphone, tablet, or notebook.

The Amkette Evo TV 3 4K is a decent option for your home entertainment setup. The new upgrades will certainly attract some eyeballs. “Evo TV 3 sets the benchmark with its cutting-edge technology and Ultra-HD 4K picture with HDR and 7.1 channel surround sound,” said Rajiv Bapna, Director, Amkette. Will you pick the new media streaming device for your home? Let us know in the comments section below.

Also read: VR Focused Samsung 360 Round Camera Comes With 17 Lenses – All You Need To Know