Pune based electronics maker, Byond seems to be taking on its compatriots head on. Competition may be launching dual core smartphones at a higher price point but the sub Rs.10,000 price bracket is the one that would bring in volumes and they are looking to do just that. Byond has just launched an affordable dual core smartphone named Byond B63 at a price of Rs12,499 but it’s retailing at Rs.9,999 so we believe the latter will be the price of the smartphone.

The B63 comes with a 4.5 inch qHD TFT capacitive touch screen with a display resolution of 960×540 pixels and it launches with Android 4.1 Jelly Bean when every budget droid out there comes Androud 4.0.4 ICS. So yes that gives it an edge over the rest. It looks like HTC One X from the back panel which houses a 8 MP HD camera which we believe would give you better pictures than the other budget 8 MP snappers out there.

Some of the specifications of the smartphone are: 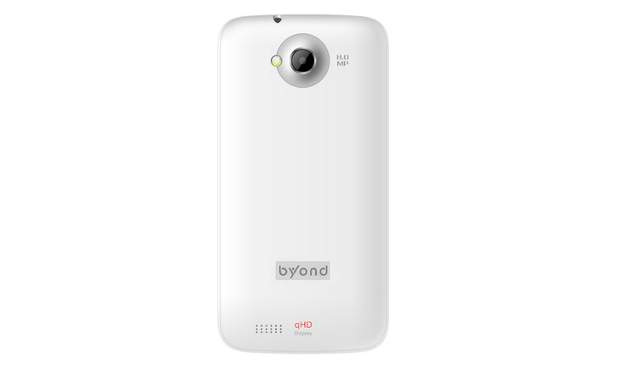 The budget droids come with 1 GHz dual core processor whereas the Byond offering comes with a 1.2 GHz dual core processor. Byond also is the company that brought to us the first 6.1 inch phablet which was made in India and now they are focussing on better displays and better cameras. They surely know what an average Indian customer wants and the average buyer is in for tasting Android Jelly Bean, albeit on a budget.