Last year Lenovo announced Lenovo Mixx 2, a 8 inch windows tablet with good specifications. Now this year Lenovo geared up to have best windows tablet of 8 inch display. The new Lenovo ThinkPad 8 has higher resolution than any other 8 inch Windows tablet available in the market. Although it doesn’t come close to the retina display of iPad mini. But still it gives pretty good viewing angles. In Mixx 2 Lenovo used 1.8GHz quad-core Intel Atom processor, but this time Lenovo launched ThinkPad 8 with 2.4GHz quad-core Intel Atom processor. So as performance wise, ThinkPad can compete with other tablets available in the market. Lenovo has also increased the screen size of ThinkPad a little bit as compared to Mixx 2. 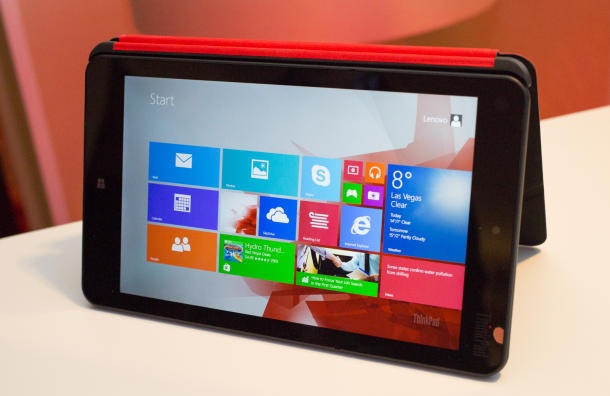 Talking about the specifications it’s got 8.3 inch display with 1920 x 1080 pixels resolution that gives pretty good viewing angles. ThinkPad is running on latest operating system from Microsoft that is Windows 8.1, loaded with many useful apps and software like Microsoft office and have ports like  micro HDMI and Micro USB makes this tablet really good deal for professionals and students.

As performance wise it has 2.4GHz quad-core Intel Atom processor, although we are not clear about RAM of this device. But will be a great performer as we have seen other specifications. The last years Mixx 2 got 2GB RAM on board so we are sure that it will also got 2GB or more than that.

There are three models available of this device as internal memory with 32GB, 64GB, and 128GB models. And you also got 3G and LTE support for this device. But we are not quite sure that when it will come to India Lenovo will launch it with LTE support too. Because LTE or 4G is only available on the specific location in India.  There are also micro HDMI and Micro USB ports available for connecting keyboard and other peripherals..

Specification wise this  tablet is a true winner, but lack of stylus will be big disappointment for those who are used to of stylus. But Lenovo is offering a Quickshot cover with this tablet.

Talking about the price of this device it is starting from$399 and will launch in later January in US. But there is not any word about launching it in India or in other countries. But we hope Lenovo will launch it here soon with a competitive price.