Apart from the super-expensive Apple iPhone X, multiple new flagships have arrived in the market. The Google Pixel 2 XL and Samsung Galaxy Note 8 are already being touted as best smartphones of the year. Both devices have a lot to offer but how do they compare against each other? Let’s do a quick comparison and find out. Read more to find about Samsung Galaxy Note 8 Vs Pixel 2 XL Comparison – Which Phone Is Better? 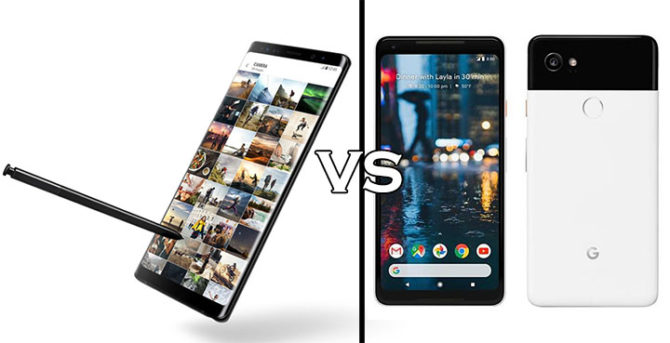 The Google Pixel 2 XL has been priced in India at Rs 73,000 and Rs 82,000 for the 64GB and 128GB variants, respectively. Both models will be exclusively available via Flipkart from November 1.

On the other hand, Samsung Galaxy Note 8 is priced in India at Rs 67,900. The Samsung handset has an advantage in this segment.

The Google Pixel 2 XL is powered by a Qualcomm Snapdragon 835 processor and 4GB RAM. The internal storage cannot be expanded via a micro SD card. It is backed by a 3520mAh battery.

Whereas the Samsung Galaxy Note 8 is powered by an octa-core Exynos 8895 processor along with 6GB RAM and 64GB internal storage (expandable). It is backed by a 3,330mAh battery.

Google claims that the camera on Pixel 2 series is the best smartphone camera. In the DxO tests, the Google handset received 98 points, which is 4 points higher than the Galaxy Note 8.

The new Samsung Galaxy Note 8 comes with an improved stylus with a full set of customizable Edge Panels and Air Commands with S-Pen functionality. Additional features on the Galaxy Note 8 include Samsung’s custom TouchWiz UI, Bixby assistant (with dedicated Bixby button on the side), Infinity Display, IP68 rating, and a fingerprint sensor.

The Google Pixel 2 XL comes with Active Edge feature which allows you to squeeze the smartphone to launch Google Assistant. Additional features include an IP67 rating (water and dust-proof), USB Type-C, stereo speakers and a fingerprint sensor. Also, a new launcher with Google search bar is added on the bottom of the screen.

The Samsung Galaxy Note 8 sports a near bezel-less display with an aspect ratio of 18.5:9. The 6.3-inch super AMOLED display comes with QHD+ resolution. It measures 162.5 x 74.8 x 8.6mm and weighs 195g. The latest Samsung flagship handset looks as sleek and modern.

Both the Galaxy Note 8 and the Pixel 2 XL offer the best of Android platform. While the Samsung flagship comes with several cool features and futuristic design, the Google smartphone improves upon its predecessor. The Google handset is also bound to get the latest Android updates. We will have to test these devices in real-world scenarios to get a complete picture. Which of the two premium handsets will you go for? Let us know in the comments section below.